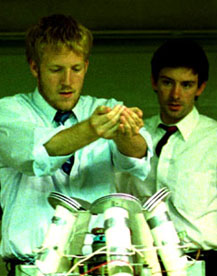 Winner of the Grand Jury Prize at the 2004 Sundance Film Festival, Primer – currently playing in limited release – is Shane Carruth’s directorial and acting debut. Set in the suburbs, the film follows Abe (Carruth) and Aaron (David Sullivan), two young engineers working on projects in their garage who stumble onto the means to convey themselves through time. Once they realize the possibilities of time travel, the two embark on a journey that tests the very fabric of their friendship.

"I had pipe dreams thinking, ‘Maybe people might respond to this.’ I was really naïve. It was just a lot bigger than I thought it was going to be [and] has far exceeded what I thought was possible," says Carruth of winning at Sundance, as well as garnering the Alfred P. Sloan Prize for advancing science and technology in film.

With Primer, Carruth chose to use the simplified "red pill, blue pill explanations" to demonstrate how far the rabbit hole goes. This adds to the lab coat-and-beaker feel of the story’s premise and begs the question: Will the science layman moviegoer have any chance of comprehending the engineers’ techie-talk, which provides the foundation for the film’s back story?

"It was important to me that what [the characters are] saying [onscreen] is real and based on the real world," says Carruth. "Those scenes are written with information about the politics of the group and who’s enthusiastic about what; who’s proprietary," he says while pointing to the human nuances of the characters he drew for his film.

"The hope was that even if they’re humming, [then] it’s propelling the story – you’re learning something," Carruth continues. "I didn’t want someone to come in and go, ‘Now give it to me in [plain] English’ and then someone else delivers some [hackneyed] metaphor for what they’re actually doing."

"I needed this device to heighten the risk," he adds, referring to the film’s time travel machine. "When I got to the part about it affecting time, not only did it satisfy the theme but it also seemed like there were a lot of things to do with it that I hadn’t seen before."

According to Carruth, one thing that’s always bothered him about time travel movies is the shift into Einstein-based subject matter after the story picks up at one point, and then floats into another. "If you [were to] jump back a day, you would find yourself in an empty space because of the amount of distance that the earth has moved since yesterday," he says matter-of-factly. "It seems like any time you are going to address moving in time, you’ve got to address space. And it doesn’t help that space and time are considered part of the same fabric. So coming up with the analogy of how I thought this [machine] would work in the real world, had this weird logic to it that was interesting to me."

Placing all Dr. Bunsen Honeydew and science fiction what-ifs aside, the theme of Carruth’s film posits an ethics-based storyline that points a finger at what Abraham Lincoln called "the better angels of our nature." As Carruth sees it, shooting the movie involved more than taking a leap of fantasy.

"As I get older, I think I need to find a way to understand why people do bad things [to one another]," he says. "I knew that I was going to have [to tell] this story. I was interested in it because it seemed very universal. Whether you’re talking about politics or power structures. … This is something to me that is worth exploring and talking about."