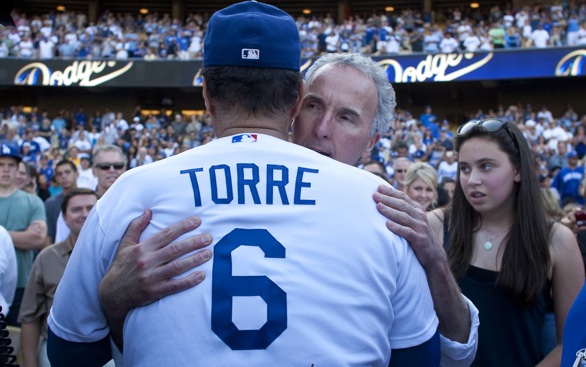 On Fan Appreciation Day at Dodger Stadium Oct. 3 the fans made a statement of their own. They didn’t show up. In a stadium that seats nearly 60,000 people, barely a quarter of the seats were occupied. It seems there were more prizes to be given out than fans to take them. Although the official paid attendance was listed as 38,000, the number of fans actually present we can only guess at since the turnstile count at Dodger Stadium is no longer shared with the public.

The game itself passed in a kind of deadened malaise. The Dodgers beat the Arizona Diamondbacks by a score of 3-1. Matt Kemp hit his fifth homer in five days. Eighteen-year veteran catcher Brad Ausmus got a couple of hits in his last big league game. Polite applause accompanied both achievements and the fans got up when ace reliever Hong-Chih Kuo recorded the last out, but it was hard to ignore a general lack of enthusiasm in the stands. The Dodgers finish the season with a record of 80-82, fourth place in their division. Yet even more disheartening than a losing record is the current state of the franchise. The season has been overshadowed by a divorce trial that has steadily revealed unflattering news about the ownership and how they have run the organization, casting many uncertainties on the future of the team.

At the conclusion of the game, a brief ceremony was held for retiring manager Joe Torre. Torre addressed the crowd, who listened with polite deference until the moment he thanked owner Frank McCourt. At the mention of McCourt’s name, a spontaneous chorus of boos filled the stadium, punctuated with shouts of “Sell the team!” While Dodger employees on the field smirked with embarrassment, Torre made a gesture as if to say, “Now, now, be nice.” But the moment could not be undone; it was classic baseball. Amidst so much pomp and circumstance, in the grips of a carefully scripted ceremony, the unexpected emerges to define an entire season. “Booooo…!”

Perhaps it lacks the drama of a Kirk Gibson home run or a “shot-heard-round-the-world,” but it has magic just the same. Not quite the heart-warming humanity of Lou Gehrig’s “luckiest man in the world” speech, but at least as honest and heartfelt. Every once in a while in this great game it is the fans that provide the heroics by doing just the right thing at just the right moment. “Boooooo…!”