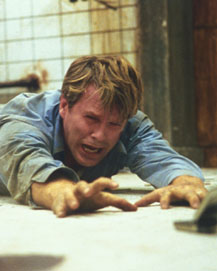 British actor Cary Elwes made his big-screen debut in his native England in the 1984 film Oxford Blues. Now, 20 years later, with a long line of films strung together on his resume, the actor – most notably recognized for his role as Prince Westley in Rob Reiner’s 1987 fractured fairytale The Princess Bride – is returning to the film world in full force, with an extra-juicy role in the psychological thriller Saw.

In the film from first-time director James Wan, Elwes plays Dr. Gordon, a man who wakes up chained to another prisoner (Adam, played by Leigh Whannell, who also co-wrote the screenplay) in a grimy cellar. The two are left instructions by their sadistic captor, Jigsaw, who watches them from afar via video camera as he times his prisoners’ responses and threatens their lives with homicidal innuendo. The question becomes, can the two survive this torture?

"I knew right away that these guys (Wan and Whannell) had already done several passes at this script and there was no room for adding or deleting scenes," says Elwes, "because the story was so intricate and the characters were so intricately woven," citing this as the reason that drew him to the Saw script and the two Australian newcomers. According to the actor, Wan even sent him a 20-minute DVD starring Whannell in which the specific iconography from the film – including the reversed bear-trap of a mask now seen on the film’s marquee posters – was used.

"I thought, ‘This is really bizarre and unique.’ I sent back a one-word note: ‘Wow!’" adds Elwes. "[Both] James and Leigh had put in an enormous amount of work into the material. I knew right away that this wasn’t going to be a bunch of slackers wondering where to put the camera. They absolutely knew what they wanted."

As Saw’s storyline unfolds, Dr. Gordon’s belief system is taken to task as he must decide what’s most important to him in his life; if he’s really been true to his wife (Monica Potter) and their daughter or, more selfishly, his career. Through a series of revelatory flashbacks, the otherwise benign Dr. Gordon unveils a darker side to his persona.

"There’s a great history of British people playing the villains in American films. I think Alan Rickman [Hans Gruber in Die Hard] would agree with me on that," says Elwes with a laugh, reminiscing about his more villainous roles in films like Days of Thunder and Kiss the Girls. And although the boyishly good-looking actor has played a handful of nice guys in his career – in such films as Robin Hood: Men in Tights and Liar, Liar – he admits that he does have an affinity for what he calls the "juicy parts."

"I don’t tend to see myself as a ‘leading man,’ per se. I tend to just consider myself an actor and, as such, I gravitate toward material where the character is ‘well drawn and well thought out.’ Something that I could really sink my teeth into," he says.

"I find this fascinating, people who are flawed. We are all flawed [as humans] in some way. People tend to identify with that more than your average, one-dimensional, heroic character."

Saw is a thriller with a moral twist that explores why most of us tend to take our lives for granted. Elwes reveals his take on the movie’s theme and, simultaneously, how he applies the lessons learned from Jigsaw into his everyday life.

"I think that we’re all somewhat fascinated by the darker side of human nature," Elwes admits. "It is possibly because we all possess within us the conscience and the good common sense not to delve into those aspects of what is obviously part of our nature, yet we’re fascinated by people who do. I count my blessings every day," says Elwes.

"Saw is a very dark morality tale," adds the actor, explaining how the film’s serial killer tortures people in an attempt to make them appreciate life. "That, in and of itself, is a morality tale. Albeit a very distorted one."