Los Angeles Belongs to the Galaxy 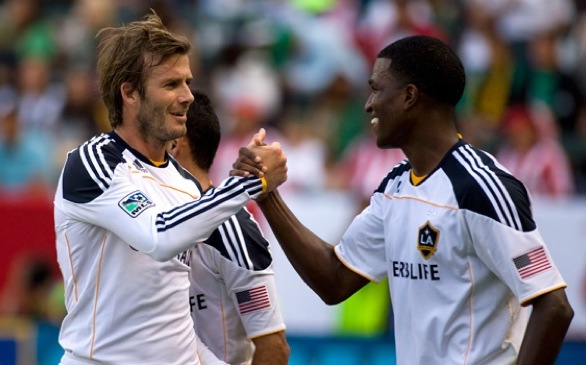 The Galaxy proved yet again that Los Angeles belongs to them after defeating Chivas USA 2-1 Oct. 3 at the Home Depot Center before 24,283 in the Honda SuperClasico. With the victory, the Galaxy remain atop the Western Conference with the best MLS mark, just two points ahead of Real Salt Lake.

“These games are always fiercely competitive, and tonight was no different. I give Chivas a lot of credit. They played really hard. I think it’s a great win for our team,” Galaxy head coach Bruce Arena says. “We had to overcome some questionable officiating and hang in there and play hard. No question about that, and we got the three points.”

Forward Edson Buddle and midfielder David Beckham each scored in the first half to lead the Galaxy’s 2-0 edge at halftime. Buddle knotted his 15th goal of the season as he one-timed a shot off a Michael Stephens pass.

“It bounced perfectly, that’s why I was able to hit it the first time, and I got it on target to the back post. It was all about the bounce,” Buddle comments on his goal. “Maybe if it would have skipped, I would have had to take a touch to get a good angle to shoot, but it bounced perfectly.”

Beckham, on the other hand, netted his first score of this campaign on a wonderful free kick past the Chivas USA goalkeeper.

“I always say with my free kicks, it’s something I practice week in and week out and if they go in, it proves that when you practice, you get rewards from it,” Beckham says. “Tonight was a good night for myself with the goal, but it was more important that the team won. Three points were important.”

Arena remarks on both goals as well.

“From that position, the spot to put the ball is to the goalkeeper’s left and we said at the bench if he beats the keeper to the left, it is going to be a goal, and it was. It was a great free kick,” he states. “I think Buddle had a terrific finish as well. Stephens hit a great ball. He had a couple of chances earlier, especially when Beckham played him through and he hit the crossbar.”

The first half of the contest completely belonged to the Galaxy, as the second went Chivas USA’s way. Nonetheless, Chivas USA’s effort to make a comeback came short. Forward Alan Gordon managed to score in the 63rd minute. Defender Jonathan Bornstein registered the assist as Gordon headed a driven ball past Galaxy goalkeeper Donovan Ricketts. Speculation sparked since Gordon appeared to be offsides in instant replay.

“I think he would tell you that on the goal they were offsides on, that he should have been better and probably tipped that ball over the crossbar,” Arena remarks. “Needless to say, the linesman has to put his flag up there. That is such an obvious offsides. I’m disappointed with the level of officiating in this game tonight. You have to get that call right.”

In the 76th minute, midfielder Eddie Lewis apparently showed violent conduct and was sent to the showers early with a direct red card.

“It is hard to know what Eddie’s intent was coming down,” Arena says. “It looked pretty innocuous to me. I am still trying to figure out how the other guy didn’t get a red card for a tackle like that.”

Chivas USA’s loss was their third consecutive defeat, and it practically eliminates them from playoff contention. This is the first time the squad will not compete in the playoffs since 2005.

Vasquez also indicated that he was very pleased with the team’s second half performance, but not particularly its first half showing since they were down 2-0 at halftime.

With three matches left in their regular season schedule, the Galaxy travel to Philadelphia Thursday, Oct. 7, to face the Union at 5 p.m.