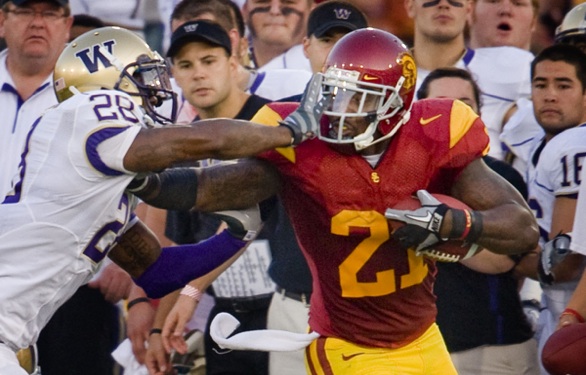 USC’s potential perfect season ended Oct. 2 at the Los Angeles Coliseum, as they suffered a 32-31 upsetting conference defeat to the visiting Washington Huskies.

“Unfortunately for us, we had so many opportunities to finish the game out,” USC head coach Lane Kiffin says. “If you’re going to be a championship team, you have to finish people off when you have the ball. You can’t go and kick field goals.”

The Trojan offense looked magnificent yet again after totaling 484 yards, 186 passing and 298 on the ground. Nevertheless, their defense still needs a lot of work as they surrendered 536 yards of total offense to the Huskies that included 310 passing yards from future NFL quarterback Jake Locker. He also added 110 rushing yards.

“It feels awesome to have the team compete like that for four quarters and then win it in the end,” Locker says. “The reason I stuck around was to play for this team and these guys.”

For USC, senior running back Allen Bradford collected 223 yards on the ground with 21 carries, including two touchdowns. Senior receiver Ronald Johnson caught six passes for 109 yards but had no touchdowns.

The affair went back and forth most of the time, and it resulted in the Huskies beating the Trojans for the second consecutive year on Erik Folk’s game-winning field goal as time expired.

USC took a 7-0 edge with Bradford’s 37-yard touchdown run 11:32 into the first quarter. The Huskies responded with a field goal and two touchdowns to take a 17-7 lead by 11:57 of the second quarter.

The Trojans (4-1, 1-1) scored time after time to counter with the Huskies’ scoring drives, but it was not enough in the end. USC’s loss dropped them from national ranking for the first time this season.

After experiencing a heartbreaking loss in its season opener and a disappointing defeat in its second game, UCLA has earned three consecutive victories in fine fashion. UCLA’s latest win came Oct. 2 with a 42-28 win over visiting Washington State at the Rose Bowl in Pasadena before an almost sold-out crowd.

The Bruins came back to win the game after being down.

The running game has been essential for the Bruins, who had two different tailbacks rush for over 100 yards against the Cougars. On 30 rushes, sophomore Johnathan Franklin carried most of the load after mounting 216 yards that included a touchdown. Furthermore, junior Derrick Coleman collected 185 yards on the ground with 15 rushes. Coleman made a 73-yard run that sparked the crowd, too; he scored three touchdowns.

The Bruins captured a 14-0 lead by the 13:20 mark in the second quarter after Coleman scored on a one-yard run. Franklin scored on a three-yard run in the first quarter. The Cougars responded, making the scoreboard read 14-7 after quarterback Jeff Tuel passed a TD to Jeffrey Solomon from nine yards away.

Two field goals from Bruin Kai Forbath gave UCLA a 20-7 edge, but the Cougars countered with another touchdown with just 13 seconds left before halftime. Tuel connected on a pass with Daniel Blackledge from 18 yards.

Washington State seemed destined to win their road game, as they fired yet again with two straight rushing touchdowns from James Montgomery to take the lead 28-20. The Bruins then scored three unanswered touchdowns and never looked back at the Cougars as they gained their first conference win. UCLA is 3-2 overall and 1-1 in PAC-10 play.

“I think the lesson that I’m going to focus on from this game is our ability to respond when things look bleak,” Bruin head coach Rick Neuheisel says.

On the passing end, Bruin sophomore quarterback Richard Brehaut tossed 128 yards on 12-of-23 attempts. Brehaut filled in for the unhealthy Kevin Prince.

No UCLA receiver had more than 30 yards receiving, which is indicative of UCLA’s desire and game plan to run more than to pass.

Up next for the surging Bruins are the California Golden Bears in Berkeley on Saturday, Oct. 9, at 12:30 p.m.