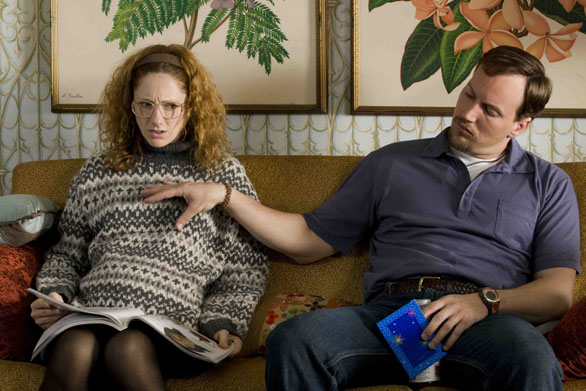 It goes without saying that men who aggressively play and ravage the dating field are an incredible threat to single and sympathetic women the world over. Like their real-life counterparts, irritating and shallow characters plague the silver screen and remind the female audience why being single in a pond made for mates is so terrifying. The players are sharks who will bite it and boot it the first chance they get.

Barry Munday (Patrick Wilson) is such a man who, unlike many Hugh Grant bad boys, isn’t even very suave or debonair enough to captivate the immediate sexual attention of fellow co-workers, theater workers or underage girls with both daddy issues and an overbearing father.

But Barry does manage to maintain this persona without seeming to try or care too much about his conquests, moving from one to the next out of impulse, not affection, until his world is rocked by the aforementioned domineering dad who attacks Barry where it will hurt the wannabe ladies’ man most. That’s right, Barry wakes up in the hospital with amnesia and without his testicles.

As luck would (not) have it, a woman by the name of Ginger Farley (Judy Greer) claims Barry is the father of the unborn child as a result of their one-night stand. Ginger is the antithesis of Barry. Where he is a sexual deviant, she is as close to a virgin as they come (seeing as she was one until she met Mr. Munday). Where he is concerned with physical attributes, she has frizzy auburn hair, oversized glasses and baggy clothing typically made of a muted brown or tacky patterned fabric.

They agree to go on with having the baby, which is not nearly as difficult as telling her prim and proper parents (Cybill Shepherd and Malcolm McDowell) and seductive sister (Chloë Sevigny), who force some conflict into Barry’s life, though not enough to ruffle his confidence.

The film ends neatly and predictably, which is fine enough. However, if a kind resolution had not been reached, I’m not so sure the audience would be upset. Wilson and Greer are good in whatever they do, but these characters are grating caricatures who do not win the audience with authenticity or attempted compassion. Unlike Knocked Up, which charmingly portrayed people in a rotten pregnancy predicament, Barry Munday struggles to do such, going for the easy joke instead.

However, the film is worth a watch. The veteran actors have the comedic timing to elevate the material to a level unbefitting its substance, and there are moments that feel exceptionally real and humanistic.


Barry Munday is currently in theaters.
Article posted on 10/5/2010
This article has been viewed 1429 times.