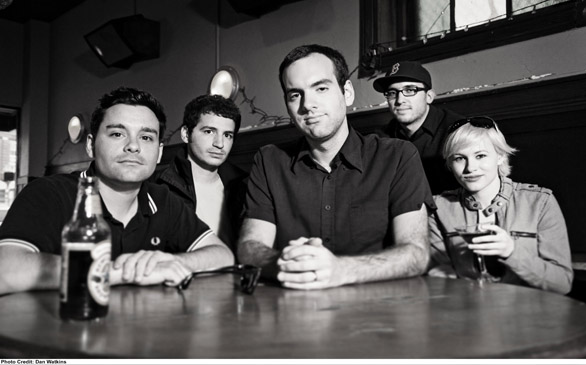 Boston’s New Collisions resurrect a brand of power pop seen scarcely since the early ’80s on their debut release, The Optimist. That they were discovered by Greg Hawkes of the Cars and were carted off on tour with the likes of Blondie and the B-52s should tell you something. That members Zak Kahn and Alex Stern hail from the Smiths-inspired indie pop band the Sterns should give you another clue as to what to expect here.

Fun, upbeat and catchy riffs contrast with lyrics of dissolution and dissatisfaction with modernity. Their raw, live sound is captured on this recording, reminiscent of old punk offerings. These are tight little pop gems, musically speaking, and the energy is electric.

Their first single, “Dying Alone,” is a tremendous earworm that will burrow its way into your waking thoughts, carried along on Scott Guild’s rhythmic, chiming guitar.

This said, I can’t help but find myself disappointed. Why? I can’t seem to get past lead vocalist Sarah Guild’s contribution to the project. The woman has a real set of pipes; don’t get me wrong. She might just be the next Chrissie Hynde in fact. But there’s something about her delivery that leaves me wanting more. She often strikes me as disingenuous, like people that are really awesome at karaoke but don’t have that memorable something to catapult them out of that realm and into the category of household name.

But there’s hope, because I have a feeling Ms. Guild is holding back and my thoughts are confirmed by the track “Ne’er Do-Well” where she finally comes into her own, emerging from the polished perfection of an “American Idol” performance with a gritty, bittersweet tongue-in-cheek sneer set against a brit-pop backdrop that would make Morrissey proud.

The Optomist is currently available.