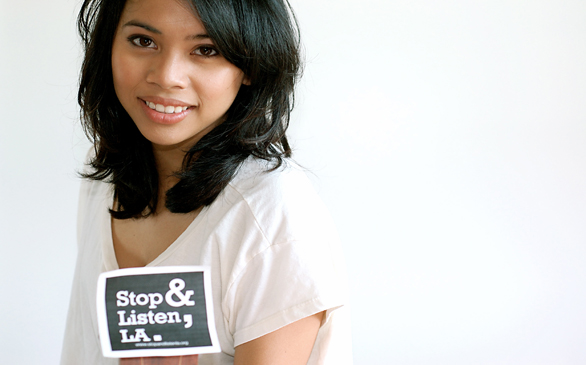 Like a type of friends-with-benefits deal where everyone is completely satisfied physically and emotionally, the idea of bringing music to L.A.’s hip food truck culture just made sense. I recently reconnected with a college friend of mine who had been known during our years at UCLA for performing these really intimate acoustic pieces at various student club talent shows. One of the biggest is UCLA’s annual Spring Sing, a type of school-wide talent show with massive crowds and celebrity judges. Some people to have played there include Maroon 5 and Sara Bareilles when they were students.

At a restaurant in Pasadena, I met up with Melissa Flavia, 23, who had graduated with me in 2009. We hadn’t seen each other in a year, and we discussed where our lives went since graduating, and there was something tragically ironic when I heard she was playing music on the street. You get that first impression of struggling artist, but somehow the story turned into something entirely different.

She explained this need to somehow just start playing music anywhere and everywhere. She always frequented food trucks, and her favorite was one in Eagle Rock called Leo’s Taco Truck. She approached the owner, a man named Leo, obviously, and asked whether she could play music in front of his customers. “Ahh, more business for me mama-cita” was his answer, and so she started to play, and, of course, everyone was satisfied.

Eventually, Melissa was referred to other food truck owners who were more than happy to have someone liven up the atmosphere. Wherever the food truck went, Melissa went with her guitar. Now when you’re a street performer playing in front of food trucks, the elements can get to you – this means drunken crowds and police intervention on zoning rules for musicians.

There was one time on Abbot Kinney Boulevard in Venice when she was performing in front of a restaurant and was forced to move because a musician performing was somehow obstructing the way for drunken pedestrians. Undeterred, Melissa set up shop on top of a food truck where her sweet melodies were masked by loud crowds and music from someone’s obnoxious speakers. The police eventually ruined the fun again because you need a permit or something to play music on top of a truck.

As much as it was frustrating, there was a sense of satisfaction in bringing music to the masses, her own way, in her own time.

All she wants, she tells me, was “for people to just stop and see that art is happening around them.” It’s an ideology that slowly bubbled its way into fruition since her college days riding the city bus to-and-from UCLA to her home in La Canada everyday.

“At UCLA everything is so rushed, but taking the bus forced me to slow down,” she says.

It was this mentality that resonated with other musicians, an idea that music can be found anywhere, not just in overpacked amphitheaters but on that street corner where they sell tacos. The idea organically grew into the concept of a nonprofit organization she called Stop & Listen LA (stopandlistenla.wordpress.com). Using family networks and musicians she’s met on the way, her “project” is becoming something big with business cards, social networks and an official Web site complete with video uploads of all of their events. Not to forget all the paperwork officially filled out for nonprofit status and grant funding. Currently, musicians from Stop & Listen LA perform at gallery openings, street fairs and various community events, but food trucks are their favorites, for obvious reasons.

Not only is there a public benefit, but musicians are receiving the satisfaction of getting their music heard beyond the typical venues of open-mic nights. Plus, it’s a real chance to actually play music in and around Los Angeles.

And it makes sense that Melissa’s organization came at the right time, when the appeal and rawness of street culture is turning mainstream, a culture whose seen the rise of Banksy and bicycle crank mobs. The marriage of street performer and the food truck go together like white on rice; both competing against the establishment amidst the confines of rules and regulations. It’s a struggle just to exist when all you want to offer people is something pleasantly appetizing.

So next time you see a food truck, be prepared to stop and listen while eating your food on the sidewalk. It will be a completely satisfying experience.

D-Day
A Meat-Eater and the Vegan Food Tour
3,164 views

D-Day
Know Your History: Or Be History
2,349 views