It’s Kind of a Funny Story: Zach Galifianakis is a serious man. 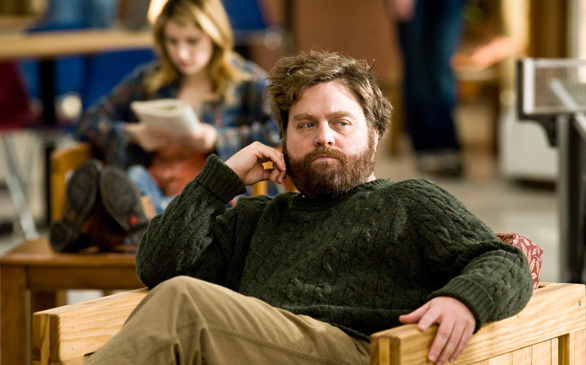 A young kid with a somber attitude narrates his weeklong stay at an adult psychiatric ward. You have to admit; it is kind of a funny concept as long as you aren’t the one being admitted. Although the film emphasizes the “kind of” and plays down the “funny,” there is an understated humor that rides inconspicuously throughout, and that may be solely thanks to Zach Galifianakis, who is known more for his slapstick jokes than for this subtle performance that tugs at our tear ducts, which is the case here.

“The most important parts are the quiet parts,” says a very friendly (despite the early hour) Galifianakis. “I want people to question whether something is funny or not. I don’t want to hand-feed them.”

Hand-feed them he certainly does not. A veteran to stand-up, Galifianakis is slowly tackling the ocean of feature films with a dexterity and finesse of someone with a much more diminished beard. Those aren’t my words, but as he spits his take on filming the dramedy, he is also sipping on coconut water “with chunks,” which he claims is “the best thing ever.” Again, he offers everyday advice like he’s everyone’s big brother, probably because he has been working for decades to land the big roles.

“The Hollywood machine sees you in one thing, especially if you’re a comic,” says Galifianakis, who gains a weary sort of expression when discussing his career. “I was looking for something that was a little bit more mature and a little bit more subtle. As far as me as a moviegoer, those are the types of movies I see. I prefer more subtle, not so crazy, over-the-top stuff. I only see movies that I’m in.”

Ironically, the jovial actor found working on this film a struggle to stay positive. Because they shot in an abandoned wing of a working hospital, Galifianakis thought it was “very depressing. I was really grumpy the entire time we were shooting. I don’t know if that was a conscious thing. I had lack of sleep, and my patience was low. I was the curmudgeon.”

Like any good story, there is more than one side, and this film mainly centers around Craig, a high school kid (played by newcomer Keir Gilchrist) who can’t handle the pressure that is mounting in his social, professional and private lives. The lovely and talented Emma Roberts stars as another patient at the hospital and Craig’s juvenile love interest.

“It was a very professional set,” says Roberts when asked the same question as her “curmudgeonly” costar. “We got everything done, and we had a nice time. It was happy and mellow. I’ve been on sets where it’s joking the whole time and craziness and fun. And I’ve been on sets where it’s kind of a weird atmosphere. This one was happy. I can’t complain.”

Though these three are the stars of the flick, writing and directing duo Anna Boden and Ryan Fleck, who have been a team for films Half Nelson and Sugar, also emphasize the leaders of the ward, the older characters who bring the humanity and the humor to the somewhat depressing subject of the human psychosis. Galifianakis admits to forming friendships with actors Matthew Maher and Adrian Martinez, but found it hard to connect with his younger co-stars.

“I don’t have anything in common with a 17-year-old,” jokes a quite serious Galifianakis. “I hardly have things in common with someone my own age. I always think that all teenagers think I’m weird and they’re too cool. That wasn’t the case here, but still.”

Gilchrist, who is best known for his recurring role alongside Toni Collette in “United States of Tara,” is the scene-stealer of the film and should be recognized for his natural ability despite little formal training. He is able to battle with Galifianakis for screen dominance, which Gilchrist attributes to instantly connecting with his character, Craig.

“I try and bring any personal experience to the parts I take,” says 17-year-old Gilchrist, who finished his schooling to pursue acting. “I think there is a part of me in everything I do. Craig definitely had a lot that was easy for me. To find where he was coming from took three seconds.”

It’s Kind of a Funny Story releases in theaters Oct. 8.