Life as We Know It: Josh Duhamel is a chick magnet. 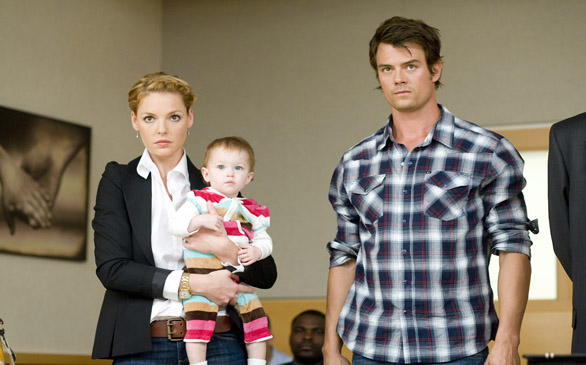 Life as We Know It starts out simply enough.

Holly Berenson (Katherine Heigl) is an up-and-coming caterer, and Eric Messer (Josh Duhamel) is a promising network sports director. Both attractive and unattached, their best friends set them up on a blind date that ends up being like a disastrous recreation of Paula Abdul’s music video where she dances around with an animated cat. She’s uptight, he’s a wild man and, needless to say, things don’t go well. But when their dear friends die suddenly and tragically, leaving behind an orphaned infant daughter, Holly and Eric are forced back together to care for their goddaughter and, wouldn’t you know it, sparks fly. Like Paula says, opposites attract, and life, as we all know, is a complicated, sticky ride.

Speaking to the film’s traffic-stoppingly attractive stars, both former models, at the Regency Hotel in New York City, the idea of either of them ever needing to be fixed up seems like the film’s biggest stretch.

“Me neither,” Duhamel seconds. “I’ve always been in relationships. Dating always scared the crap out of me.”

“Then how did you end up in the relationship?” Heigl asks, taking the words out of my mouth, though the answer is blaringly obvious when you glance Duhamel’s devastating way. The Transformers star goes far beyond the typical “hot” classification and into “tropical” territory – steamy, sultry and sweltering.

“So you never met someone, like, at a bar and went out on a dinner date the next night and had a terrible time? That never happened to you?” Heigl continues to rib.

“I’m sure it did, I just don’t recall—” Duhamel begins.

“Because you got so drunk at dinner, because it was so awful?” Heigl interjects.

“Nope,” Duhamel grins. “I was too drunk from the night before to remember.”

While Heigl hasn’t dealt with set-ups, she insists she had plenty of bad date experience to draw on when filming.

“The worst [was when] I was 18 and 20 pounds heavier, trying real hard to work it off at the gym,” Heigl recalls with a mischievous glint in her eye. “My trainer, who shaved his legs – not that there’s anything wrong with that – took me to Sizzler, gave me his head shot and asked if I could get him into my agency. I knew it wasn’t the extra 20 pounds that turned him on.”

With their dating years behind them (Duhamel married Fergie of Black Eyed Peas in 2009 while Heigl wed singer Josh Kelley in 2007 and the pair adopted a little girl with special needs from South Korea in 2009), the film’s trickiest element was working with their infant co-star, played by identical triplets Alexis, Brynn and Brooke Clagett.

“Before we started shooting, I came to Atlanta just to acclimate to the kids and to get them to be comfortable with me,” Duhamel says. “That was huge when we were filming because they really responded to me. [Katherine] was in the process of adopting her own child at the time so she couldn’t come early.”

“And they did not like me as much,” Heigl laughs, “but at least I had one in my trailer who did.”

Or maybe it’s just that all girls respond favorably to Duhamel.

“I have an affinity for kids,” Duhamel shrugs, adding, “I think it’s because we’re on the same emotional level.”

For Heigl, she calls Life as We Know It a “living journal,” one that chronicled her first few months with her new adopted daughter, Nancy Leigh.

“I was living on camera what I was living in my life,” Heigl says reverently. “It’ll forever remind me of my first few months with this 9-month-old baby who was so new to me and I was so new to her. It was really intense and really glorious and certainly overwhelming. The performance is me. I didn’t even have to act.”

Life as We Know It releases in theaters Oct. 8.