Nowhere Boy: An Audacious Biopic About John Lennon and His Mother 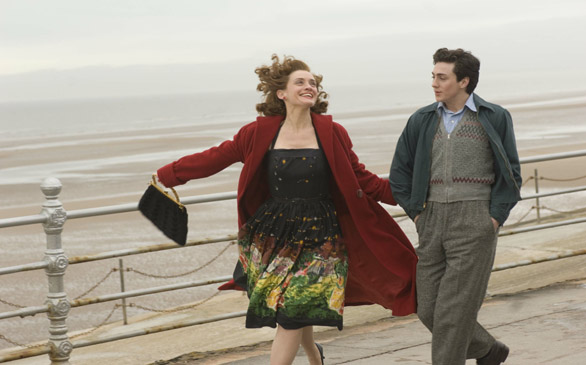 He was the charismatic frontman of one of the most influential music groups of the 20th century. His songs inspired, angered, charmed and confused both fans and naysayers alike. But before he was controversial, he was merely a teenager trying to find his way while growing up on the streets of Liverpool.

Nowhere Boy tells the story of pre-Beatles John Lennon. The film looks at his life as a young man grappling with being abandoned by his mother, Julia (Anne-Marie Duff).

John (Kick-Ass star Aaron Johnson) is sent to live with his strict aunt Mimi (Kristin Scott Thomas). Mimi allows very little leeway in John’s teen years, leaving him ripe for rebellion. When a friend informs the teen that the mother he has yearned for has been living blocks away, John reaches out to her. The two form a fast friendship, and Julia plants the rock music seed in her son’s head. She teaches him to play the banjo and gives him a rock music tutorial on all the best singers and guitarists in the genre.

While playing shows with his mates from prep school, John meets 15-year-old Paul McCartney. With a bit of rivalry in place, they too form a friendship and end up playing alongside each other in a skiffle band called the Quarrymen.

As time goes by, John soon learns why his mother left him with his aunt. The family’s secrets seem to extend as far as the eye can see. Still, he does his best to come to terms with his mother’s flighty and fickle behavior. John also reaches a bit of common ground with Mimi. But just as things begin to make sense, tragedy strikes and young Lennon’s life is forever changed.

Nowhere Boy is directed by Sam Taylor-Wood. For years, the 43-year-old has been a staple in the UK art world, exhibiting her work internationally and teaming up with a number of notable collaborators. For her feature-length directorial debut, Wood immersed herself in the telling of the Lennon’s story and even enlisted the support of some of his closest friends and confidants.

“I wrote to as many people I knew that would be affected by this film being made and said, ‘You know, if you want any input or say in it, then please do and do so at the beginning of the process and not in the end,’” says Wood. “Both Yoko and Paul came back with various insights and details that were really useful for me. Then they kind of stepped away because they were very nervous about what I would do.”

“I guess all of it really was such a challenge,” admits Wood. “I mean, I approached it as a coming-of-age story and really the transition of boy to man and all the pain and turmoil he went through.”

This includes a number of scenes that hint at a flirtation between Lennon and his biological mother – a fact based on a biography written by Philip Norman.

When it came to finding an actor who could embody Lennon’s playful yet intense personality, Wood chose Johnson (who, at the time was 18) to take the lead. But the decision was not an instantaneous one for her when he auditioned while Kick-Ass was in production.

“[Aaron] was playing kind of a geeky, nerdy American so I didn’t have high hopes for him,” she jokes.

However, since Nowhere Boy wrapped production much has been reported about the couple’s off-screen relationship (She and Johnson have over a 23-year age difference between them, are engaged to be married and share an infant daughter.). Regardless, Johnson is quick to assert that Wood’s talent and good heart made his job a whole lot easier.

“She’s a hardworking, wonderful, warm kind of person,” he says of his fiancée.