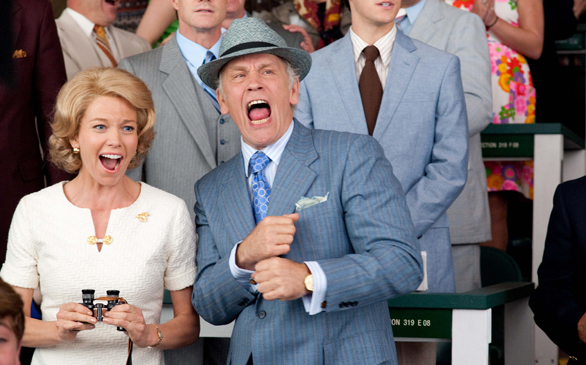 Spoiler alert: If you know anything about horse racing, you already know how Secretariat ends. But for those who aren’t familiar with the 1973 events that inspired this film about Penny Chenery (played by Diane Lane) and her racehorse, Secretariat, director Randall Wallace (who previously scribed Braveheart) and writer Mike Rich (who specializes in heartwarming, bring-a-tear-to-your-eye stories of triumphant over adversity like Radio and The Rookie) have made a film that ensures “a pony” will be at the top of everyone’s holiday gift wish list.

To celebrate the film’s opening, the director and his stars ventured out to the Art Deco grandeur of Santa Anita Park, the oldest race track in Southern California, where Secretariat ran a key race and scenes from the film were shot, to discuss the majesty of horses, the horror of 1970s fashion and the power of an $800 camera.

“For thousands of years, the human race has spoken of horses in a way that referenced that magnificent mystery about them,” Wallace says. “That spirit of the horse is timeless and about transcendence.”?

“I personally really love horses as a species. It’s my totem animal, if you will,” Lane offers bashfully. “I know it’s a little corny, but that’s my truth.”

The actress says she had great affection for the story of Secretariat long before she was approached to appear in the film. In 1973, the horse was featured on the cover of Time Magazine, Newsweek and Sports Illustrated, becoming a national celebrity, and Lane felt the story was aimed directly at her.

“It made perfect sense to me that a horse was on the cover of all those magazines. I took that very personally being 8 years old, thinking everyone was waking up to what a great species they are.”

Stepping back to that time offered different challenges for each of the actors. For Lane, she felt tremendous responsibility to do justice to the real-life Chenery, whom she got to know while preparing for the role.

“Invariably, to spend time with someone you’re going to be portraying on screen raises the stakes. And I personally wanted to make [the film] a gratifying experience for her,” Lane says. “I don’t think Penny ever saw herself in a vain, glorious manner representing any gender or any generation. [But] with the patina of time you can say, there’s a hero.”

For John Malkovich – who plays Lucien Laurin, Secretariat’s trainer, a man who is described as dressing like Super Fly – it wasn’t acting but his costumes that tested his mettle.

“For me the challenge [in a role] is always the same, which is to try and do something well. But 1973 is really the nadir of the history of fashion. When you watch [Secretariat’s] races on YouTube, the astonishing ugliness of the clothes just blinds you.”

Wallace took great pains to recreate those races with an eye on authenticity (meaning lots and lots of polyester) while also infusing them with new life.

“We had to experience these races as participants, not as observers,” the director explains. “That required we shoot the movie in a way that no horse racing movie had ever been shot.”

Instead of shooting the race sequences from the stands, Wallace got in the dirt and muck with the horses and jockeys, in order to create something that resembles a hoof’s point of view.

While preparing for those sequences, Wallace and his crew were doing tests with a tiny, consumer camera and realized they’d stumbled on the solution to their quandary.

“We were getting shots of speed, dirt, excitement and chaos. As soon as we saw it, I was like, ‘OK, this million-dollar piece of camera equipment that we rented, I don’t want that anymore. I want this $800 consumer camera that’s about as big as your hand.’ We used that for most of the horse racing.”

“Horses are a lot easier to cast than people, and probably easier to direct too,” Wallace jokes. “We had a Secretariat look-a-like contest and the horse that won was absolutely convinced he was the best-looking horse in the whole world. There’s a shot in the movie where he’s coming around the corner in this amazing burst of speed, turning from right to left, he’s angled with the other horses coming around, and, literally, the horse turns his head to the camera, like, ‘Are you getting this?’”

Interviews
Ai Weiwei on activism in the US, his art response to COVID-19 and a secret Wuhan film
452 views

Interviews
James Bond producer: 007 ‘can be of any color’ but never a woman
1,773 views

Interviews
For Martin Scorsese, making ‘The Irishman’ was about ‘learning to die’
1,409 views

Interviews
Maleficent doubts her fitness as a mother. So did Angelina Jolie
1,023 views
bid=||