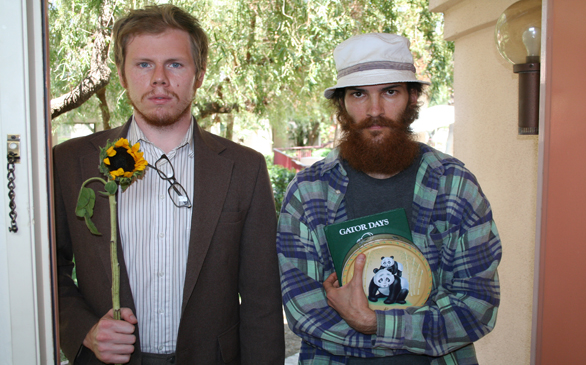 Who is the bigger Douchebag?
(Credit: Courtesy of Paladin)

Despite the fact that everyone and their mother has at some point urban dictionaried it, the word has a decidedly negative but light ring to it. Beating out its synonyms of words you may be able to get away with saying around your little sister, douchebag has its roots in female hygiene, and if you can go so far as to use your imagination a little, I’m sure you can figure it out.

Nowadays, a douchebag refers to a rotten, good-for-nothing, arrogant son of a bitch but is pronounced with phonics that sound French to people who don’t know the language. In this film, the douche is Sam (Andrew Dickler), which is not a spoiler. Sam is getting married to Steph (Marguerite Moreau, Connie from The Mighty Ducks), a hardworking and lovable woman who apparently doesn’t mind a balding man with red facial hair. Their lives are dandy like the kites they like to fly at the beach or meaty burgers they don’t eat as vegetarians until Steph decides their pending wedding must also bring her fiancé back in touch with his estranged brother Tom (Ben York Jones).

Are they awkward at first? Sure, but they hold it together for Steph who, along with the audience, is unsure about what has kept them apart for so long. Virtually on a whim, the brothers embark on the hunt for Tom’s fifth grade love, Mary Barger, who may or may not live in Santa Monica, Palm Springs or San Diego. Throughout the journey, one brother’s douchebag qualities blindingly outshine the other’s, winning him the title and the ending fit for one.

What drives the extremely low-budget indie flick that was written and directed by 27-year-old Drake Doremus are the believable characters who, beard or no beard, feel real. These are real people, averagely dressed and spoken to undermine the Hollywood starlets who have been prepping since birth. The breakout star is Dickler (what an appropriate last name) who has minimal experience acting; he’s a film editor, and, ironically, he really looks like one. Doremus is still young, but he manages to use the camera like a pro without a tripod.