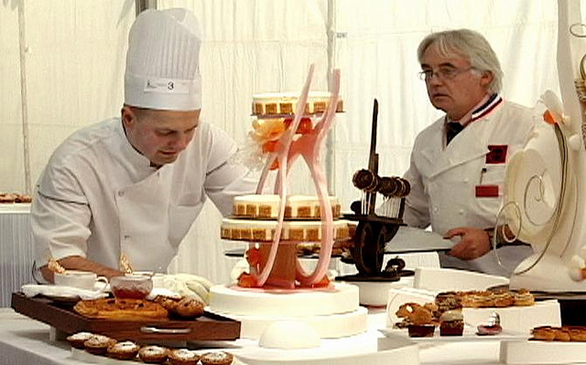 Chef Jacquy Pfeiffer sets up his buffet for the final MOF judging, while a MOF judge looks on.
(Credit: D.A. Pennebaker)

D.A. Pennebaker, along with his wife and filmmaking partner Chris Hegedus, is renowned for forging a distinct cinema vérité style on display in films like Don’t Look Back, his celebrated account of Bob Dylan’s tour of England in 1965, or The War Room, his capturing of Bill Clinton’s 1992 presidential campaign.

Pennebaker, whose work tends to focus on music and politics, has often been quoted as saying that he doesn’t make documentaries but “records of moments,” “half soap operas” and “semi-musical reality things.”

So where does his latest offering, Kings of Pastry, fall on that spectrum? Somewhere in between a record of a half soap opera that can feel uncomfortably similar to an episode of “Food Network Challenge,” but with a lower budget, not that you need a ton of pomp and circumstance to capture the drama of a cream puff.

Kings of Pastry follows Jacquy Pfeiffer, co-founder of Chicago’s French Pastry School, as he travels home to France to prepare for and compete in a grueling three-day competition that decides the Meilleurs Ouvriers de France, or M.O.F., an honor and distinction given only to the country’s finest culinary craftsmen and designated by a coveted red, white and blue collar. The competition, held once every four years, pits 16 pastry masters in a battle that’s not against each other, but against themselves. Watched by a panel of esteemed, decorated M.O.F.s, the contestants are tasked with making the most visually and palette-pleasing offerings they’re capable of.

Think of it like the Olympics – of pastry. Which sounds about as tough and intriguing as primetime Greco-Roman wrestling or a death match battle of badminton, but once you give yourself over to the proceedings, you find you’re swept away on a sugary raft, one that’s incredibly beautiful but treacherously wafer thin.

Interlaced with the stories of two other competitors – Regis Lazard, who is competing for the second time after dropping his sugar sculpture during his first attempt for the title, and Philippe Rigollot, the pastry chef from Maison Pic, France’s only three-star restaurant owned by a woman – Pennebaker’s documentary doesn’t reach for drama or heat, letting the film unfold leisurely and naturally.