Wait! I Know This One: How and Why to Cliché 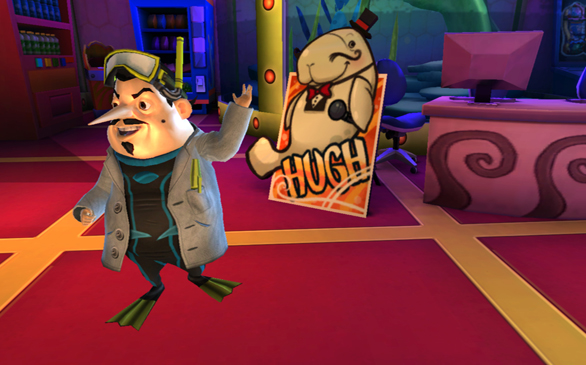 “Guilty Party” is proof that having clichés doesn’t mean killing off originality.
(Credit: Courtesy of Disney)

If you have played more than one story-driven game in the last decade, chances are that you are familiar with easy-to-identify characters, locations and scenarios. Realistically, any platformer is just “Pitfall” with enhanced graphics, the hero’s quest is just “Frogger” trying to cross a street where everything tries to kill him and romantic storylines follow “Ms. Pac-Man”’s progression of “They Meet,” “The Chase” and (presumably following the end credits) “Junior.”

It is important to note that there is a reason for this, and unfortunately, the reason is: us. The games may be predictable, but we are even more predictable. We praise the inventive writing when the second coolest character in the game betrays the main character, and we wax poetic about the romance and the emotional depths the game can reach when the girl professes her love for the hero she has pretended to hate.

No matter how much we hate clichés, we all love the instant gratification they offer. When used well, clichés can break up monotony and just genuinely make storylines more approachable. Before you start hating on clichés, consider the power of simple, familiar storytelling devices.

“Ys Seven” for the PSP is, as the name implies, another chapter in a long-running franchise. The game plays like an RPG-heavy team-based “Legend of Zelda” – complete with a 3/4 view looking down on a sword-wielding hero as he struggles through one dungeon after the next. The ability to instantly swap control between members of the three-person party in battle enhances the game by making some characters more or less suited to each challenge, plus it is nice to change combat styles between fighters, mages, archers and tanks.

Being an RPG at heart, “Ys Seven” does not skimp on the easily recognizable elements. Male characters are powerful bruisers while females stick to arrows, magic wands and lots of running away. The dungeons and monsters constantly cycle between earth, water and fire elements and bosses like the giant turtle, the giant bug and the giant plant monster are well represented. As for the characters, do I even need to tell you that the hero is a virtuous swordsman, the healer is a shy young woman and the little kid with something to prove is instantly irritating?

That said, it is one hell of a fun game to play – and mostly because of all of these familiar elements. The battles are intense, the powers are cool and even the grinding and sidequests don’t seem like so much of a chore because we never really have to pause to marvel at the novelty of the original new world the developer created. It may seem sarcastic, but trust me when I tell you that the only time this game starts to get dull is when it tries to explain the world to us. The choice here is between originality and amazing boss battles where you are constantly shifting between tactics to overcome massive foes, and I’m genuinely glad that originality is lost.

Of course, having clichés doesn’t mean that you have to kill off originality. “Disney’s Guilty Party” for the Wii takes stock detective characters and throws them into a world that is one part standard party game and one part “Clue” and manages to make a product that is wholly novel and innovative.

Players can choose between easily identifiable characters that represent everything from kid detectives and a noir gumshoe to Shaft and Angela Lansbury, all of whom look like they were designed by Pixar. They then take turns moving around a game board and play standard fare mini-games to gain evidence from the French maid, mad scientist and shifty gardener to hopefully determine the guilty party before the game’s timer is up. None of this is original, but combined it makes for an instantly loveable and amazingly memorable gaming experience.

“Guilty Party” is also guilty of having very clever writing (especially for being a game based on clichés). The storyline is deep enough to draw you into the mystery but shallow enough that it won’t scare kids away. Even though the stages can take up to 30 minutes to complete and the full Story Mode clocks in at under five hours, there is enough genuine humor in the characters, clues and the wacky mini-games that even the story-less Party Mode will keep you coming back for another half hour of sleuthing.

Sure, it would be nice if some clichés went away (I’m looking at you, bosses with three final forms.), but let’s be thankful that some developers can at least do clichés well.