The 20 Best Graphic Novels: (In No Particular Order) 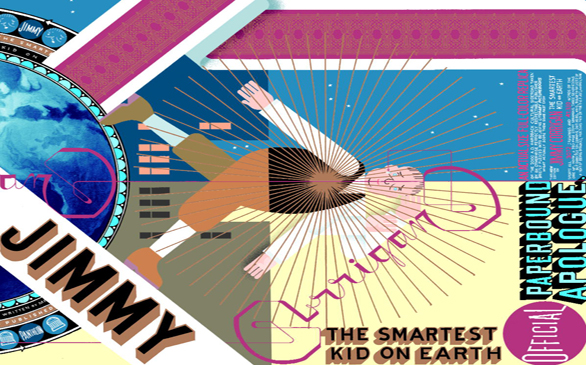 Jimmy Corrigan: The Smartest Kid on Earth by Chris Ware

Any discussion of modern comics begins and ends with Alan Moore and Watchmen. Moore is the Orson Welles of comics, and Watchmen is his Citizen Kane. It completely changed the game when it arrived in the mid-’80s, bringing with it a new psychological sophistication with extremely flawed real-world superheroes and dark, ambitious Cold War themes.

Gaiman used the framework of the Lord of the Dreaming to tell a sprawling, dark fantasy epic, drawing on everything from Shakespeare to Greek mythology, while throwing in a story about a serial killer convention. The result is the most literate of comic books that is constantly taking the reader in new directions.

The Invisibles by Grant Morrison and Frank Quitely

Equaling the scope and intelligence of Moore and Gaiman’s work, Morrison’s magnum opus follows a group of underground freedom fighters who battle an evil unseen by most people – aliens who are living among us. Along the way, he tackles just about everything under the sun – Buddism, transvestites, time travel and H.P. Lovecraft.

Miller took the Dark Knight to a darker place than ever before. Set in a dystopian future, a past-his-prime Batman comes out of retirement to kick some ass and set things right. Miller was called a fascist and received angry calls from past Batman writers, but this remains one of the key works in comics.

The Goon by Eric Powell

Comics are supposed to be fun, a fact that seems to be too often forgotten. No comic will more consistently put a grin on your face than this mash-up of classic gangster and zombie comics. Powell’s combination of lush artwork and Sam Raimi-style slapstick gore is all his own.

Jesse Custer, a one-time car thief turned preacher becomes possessed by the offspring of a demon and an angel. Now, with his assassin girlfriend and vampire sidekick, Custer sets out to find God, who has abandoned his post. Sex, drugs, violence and profanity – this gleefully over-the-top yet oddly heartfelt book has everything.

Saga of the Swamp Thing by Alan Moore and Stephen Bissette

It’s difficult to pick just one other book by Alan Moore when there are so many watershed works to choose from: V For Vendetta, The Killing Joke, Miracleman. When Moore took over DC’s flagging horror title, he reinvented the swamp creature as an Earth elemental. Bringing a new sophistication and depth of character, he elevated the industry and told some classic, literate horror stories. Plus, he gave us John Constantine.

Ditko and Lee, Moore and Gibbons – every once in awhile a writer and artist are perfectly matched with a project, and the result is magic. Criminal has single-handedly revived the crime comic. Brubaker writes the kind of gritty crime stories that would star Lee Marvin, stories about petty criminals hoping to score big, meanwhile screwing over their partners. Phillips’ chiaroscuro noir style is the perfect compliment.

As the most tortured of heroes, Batman has many times over been a vehicle for experimentation within the genre. Grant Morrison’s trippy journey into Bruce Wayne’s psyche is a prime example. In response to the post-Watchmen focus on reality in superhero comics, Morrison went the opposite direction, approaching Arkham “more like a piece of music.” Led by the Joker, the inmates of Arkham have taken over. Batman has to journey into their surreal nightmare world to rescue a hostage, facing his own demons in the process.

It’s difficult for us today to imagine what it must have been like for those young readers opening a comic book for the first time in the ’30s and seeing a superhero leap a tall building in a single bound. But this clever retelling of the earliest Marvel comics can give you a good idea. Reframing the stories from the ground level, through the eyes of a photojournalist, superheroes once again become titans, towering gods waging war above the city. Marvels also introduced the world to the trademark photo-realistic painting of Alex Ross.

Spiegelman’s Pulitzer-winning Holocaust story is one of the few graphic novels to transcend comic book readership. An elderly Jewish man (based on Spiegelman’s father) tells his son of his life in WWII-era Poland. Spiegelman uses an anthropomorphic style (the Jews are mice, the Nazis are cats) to tell this devastating tale.

Like Jonathan Franzen’s The Corrections, Shaw’s innovative and hilarious graphic novel is an epic portrait of family dysfunction. After 40 years of marriage, the Loonys announce they are getting a divorce. They summon their sons and daughter to the house for one last weekend together. Shaw renders each family member’s hang-ups with true insight and oddball humor.

Reading Norwegian comic creator Jason for the first time, you are surprised to find yourself laughing out loud while your heart breaks. Using deadpan anthropomorphic characters, Jason explores existential themes of loneliness, unrequited love and the absurdity of the human condition. He creates a singular blend of irony and poignancy.

Burns creates horror stories set in the real world. In Black Hole, a sexually transmitted disease spreads through a high school, turning the infected into disfigured mutants. The growing number of outcasts has fled to the woods on the edge of town to live. Then, the murders start. Burns captures the confusion, uncertainty and cruelty of adolescence perfectly in this surreal and mysterious work.

An arrogant architect moves to a small town to become an auto mechanic after his house is struck by lightning. Rarely is form so intertwined with meaning as with Mazzucchelli’s masterful shifting art and narrative styles.

Jimmy Corrigan: The Smartest Kid on Earth by Chris Ware

Using multiple timelines (some possibly not true), Ware crafts the portrait of his title character, an awkward, over-imaginative middle-aged man who goes to meet his father for the first time.

In this poignant autobiographical story, Thompson juxtaposes scenes of his childhood growing up in a strict Evangelical family and his experience of first love. Thompson’s cartoony illustrative style is perfectly evocative.

This long-running, self-published comedy/fantasy epic is pure storytelling and, like classic Disney movies, can appeal to all ages. The story follows three cartoon cousins who are banished and set out into a fantasy world on a hero’s quest of sorts, encountering all manner of creatures on their way to saving the world.

While not a graphic novel in the strictest sense, this beloved comic strip manages to say more in a few panels than many much longer works. Watterson uses the escapades of a precocious, wildly imaginative boy and his stuffed tiger to philosophize, satirize and entertain. He captures the spirit of childhood better than anyone since Mark Twain.

The Arrival by Shaun Tan