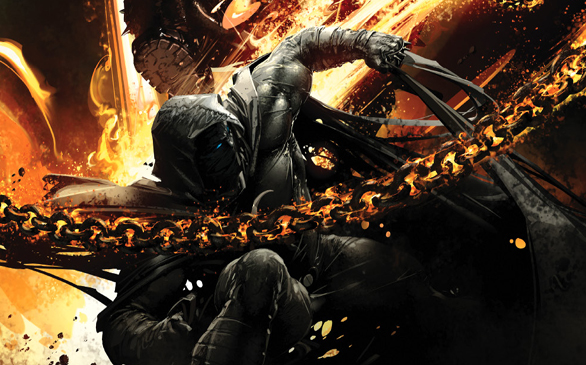 In recent years, best-selling crime novelist Gregg Hurwitz (They’re Watching) has made the leap to writing for comics, reviving the Foolkiller for Marvel’s explicit content Max line, as well as writing The Punisher and Wolverine. This year, Hurwitz took over Moon Knight.

How did you transition from novels to writing comics?

It was the proverbial offer you can’t refuse. Axel Alonso, the executive editor of Marvel, was a fan of my thriller novels. He called me up and offered me my own miniseries – I could pick a character from the Marvel vault to reinvent. Who could turn that down?

How does writing in the comics medium differ from novels?

With comics, you’re trying to tell a story in four to six snapshots per page. Writing lean and giving only essential art direction is key. There’s also less room to go inside your character’s head, so there’s a strong urge – as in film and TV – to tell the story as visually as possible and through dialogue.

You’ve said that the Punisher was your favorite character growing up. What was it like to be the first to take on Frank Castle after Garth Ennis’ iconic run?

Utterly surreal. I realized when my first book in my Girls in White Dresses run came out that I could no longer read my favorite comic because I was now writing it.

How much freedom does a writer have working on a pre-existing character? How much is dictated in editorial meetings?

Marvel has always given me a lot of creative freedom. That said, there are certain constraints. You certainly can’t have Spidey kill a busload of nuns, for instance. There have been a few times where we had some back and forth about a character’s powers, making sure I depicted it just right. Marvel quite wisely sticks to certain rules for each character to make sure that the hyper-reality is maintained and the suspension of disbelief is not broken.

He’s one crazy mofo! Marc Spector is a former merc whose life was saved by an Egyptian god – Khonshu. His personality is fragmented into different identities, including Jake Lockley (streetwise cabby), Steven Grant (millionaire playboy) and, of course, Moon Knight. While he uses these personalities as cover to investigate crime, they also arise from an inherent instability in his psychology. Khonshu is not a benevolent god – he rides Marc, driving him toward ever-increasing violence.

The timing for the heroic age couldn’t be better, considering people’s frustration right now with the ineffectiveness of Congress and everything that’s going on in the world. It’s great to see the good guys kicking some ass again.

It’s always a perfect time for superheroes! But you’re right – it’s even better when people crave escapism. My decision to take on Moon Knight, to be honest, was a creative one first and foremost. I don’t usually write toward a specific political end. But once you’re in a book, of course, world events start to influence how you write, and one always wants to draw parallels.

This is your first time working on an event book. What has that process been like?

Much more involved, more coordination with other editors and writers, which has been fun. It’s a team sport. Everyone’s enthusiasm is infectious, so it’s always great when, say, Brubaker and I hop on the phone to work out an overlap.

Event books are usually big multiple universes colliding stories, so it’s cool that Shadowland goes in the opposite direction and focuses on the street-level heroes. What’s the gist of it, and what’s Moon Knight’s role?

Daredevil has gone off the rails. Hard. And Moon Knight is part of the team dedicated to bringing him back into the fold. What MK doesn’t know is, he’s also in Daredevil’s sights.

You’ve previously worked in a more reality-based setting. What’s it been like incorporating more of the Marvel universe into Moon Knight, with crossovers featuring Deadpool and Spider-Man?

It’s been an absolute blast. It’s not only a callback to my childhood [spent reading Spider-Man], but it’s also so much fun to do things as a writer that you can only do in a comic book.

You’ve made ample use of the Max label, with Foolkiller gleefully lopping off limbs. Did you find writing for a more general audience at all inhibiting in telling a good vigilante story?

Not really. It’s all about picking the right story for the character. That’s my starting point – always with story and character. So when I think of Spider-Man, for instance, my first notions are quite different than when I’m playing with Frank Castle.

What can we look forward to from you in the future?

I’m continuing the book tour for my latest thriller, They’re Watching. It’s a suspense thriller in the Hitchcock tradition, and the film rights were just snapped up, so I’ll be overseeing that and producing the movie. I’m breaking Season Two of “V” right now on the TV front. And I just had another script optioned on the feature front. My Big Secret Marvel Project should be announced in the coming months as well. So lots of fun stuff.

Have you ever thought of creating an original comic?

I have indeed. Stay tuned!