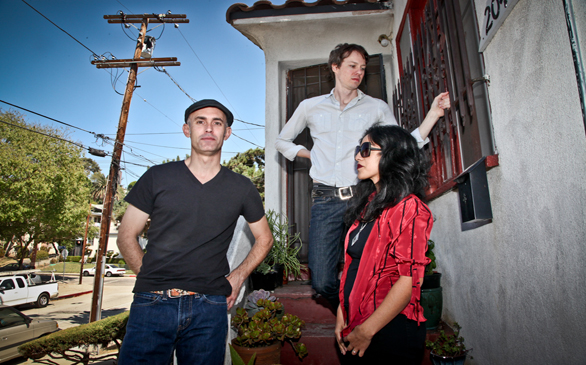 What would you expect when you put a petite, curly-haired, vivacious Argentine mujer together with her tall, subdued blanco hombre (who may or may not play a porcupine soul onstage) and add in a tres miembro, perhaps an even more subdued tambor whose musical history has scampered across the United States from Boston to Athens to Arizona to Echo Park? Then you throw in a few super eclectic instruments, two languages, some cayenne, black coffee and a severe hatred for guitar solos. And you’ve somehow compelled your interviewer to actually write out the first paragraph in Spanglish, by no fault or intent of your own.

If each of these details has not absorbed your attention like it has many well-respected critics like KCRW and the Los Angeles Times, then A) You’re just not indie, and B) Forget everything I’ve said, read no more and go gently place Wait. Think. Fast.’s recent release, Luces Del Sur, in your music player and move.

Wait. Think. Fast. is an often dark, sultry, whimsical and articulate three-piece band consisting of Jacqueline Santillan, her husband Matthew Beighley and friend Tom King. Born into the Echo Park scene after heretofore chiseled from other places and stories, journeys, instances and songs, the band seems to have a clear sense of what they want and more importantly, what they don’t.

“I used to work in the music industry,” explains Santillan. “I saw a lot of baby bands that just felt like they had to play house. Like, ‘Oh, we’ve gotta get a manager, we need a this and that.’ That’s when they get in trouble. You get so many people dipping their hands in your career and in your music.”

For Santillan you’ve got to cultivate your sound as a band. You’re not playing to get discovered, you’re noticed because you’re playing strong. Wait. Think. Fast. is that sort of band.

As varied as their sound has become and how hard it is to sustain such fluidity between two separate styles, Wait. Think. Fast. communicate through Latin rhythms expressed in Spanish words, with the indie, Echo Park artistic rock influence. The cohesiveness in instrumentation and style really sync up and play out through the record. They are a band with a tough target but hit a mark while really leaving one at the same time.

“Sometimes it just makes sense to write a song in Spanish,” Santillan says. “I can communicate different things, in condensed ways, and it makes sense.”

So then, what’s in a name? Traced from the epic novel Siddhartha by Hermann Hesse, there’s a line that says: “I can think, I can wait, I can fast.”

“Not fast like moving fast,” Santillan says. “Everyone thinks that at first.”

Although Wait. Think. Fast. is quite literally moving forward past where progress is concerned, the reason for the name extends beyond that. It’s discipline; it’s the not overacting and reacting. It’s the not giving in too greatly to both your desires and your aversions. For a fairly new touring band, although a worldly one, that’s a pretty good motto to live by.

“Movement and travel is definitely a theme in the record, all the places we’ve been, that mean something to us. It’s all very personal, like about my family, my community or something I’ve seen in a documentary. I like to write a song about an instant. I’m inspired in an instant,” Santillan explains.

The bulk of the band’s shows have been around California and up through Oregon. They’ve been busy here, live here and found each other here – the affinity for the place has made it home. Like the saying goes, “The West Coast is the best coast.”

Beighley adds laughing, “Like if we get offered a European tour, I’m gonna be like, ‘Hell no. The West Coast. London? Whatever.’”