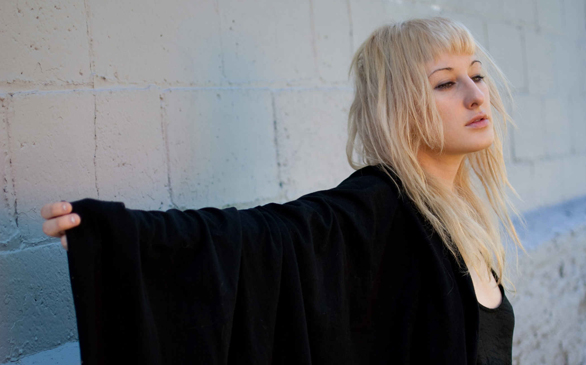 She’s recently turned 21, graduated college with a double major and moved to Los Angeles from her home in Wisconsin, so forgive Zola Jesus for offering you a mere four songs on her latest release, an EP entitled Valusia.

ZJ’s real name is Nika Roza Danilova, and she comes across on stage a bit like a blond version of Cleopatra gone goth, a situation you can see for yourself when Zola Jesus and her backup band play the Echo Oct. 14. And Valusia (available Oct. 12) is actually packed with more darkness than appears at first glance. The EP contains videos for “Night” and “Clay Bodies,” songs previously found on Zola Jesus efforts Stridulum and The Spoils, respectively.

Droop E, the acclaimed Bay Area rapper/producer and son of the legendary lyricist E-40, has partnered with clothing lines BLVCK SCALE and Diamond Supply Co. for the release of his new mixtape, BLVCK Diamond Life. The mix is a clever pairing of street and smooth soul where Droop E spits over Sade samples, including favorites like “Smooth Operator” and “Like a Tattoo.”

The set also includes a brief interview with Sade and an appearance from Droop E’s dad, who contributes to “I’m Loaded,” a cut that samples Sade’s “War of the Hearts.” Ya Boy and Bay Valentine also make guest appearances on BLVCK Diamond Life, available now for free download at soundcloud.com/droope.

Down: Diary of a Mad Band

New Orleans band Down has just released Diary of a Mad Band, a double-disc live effort that comes with a bonus DVD. The concert was recorded in London and Down guitarist Pepper Keenan describes the DVD, clocking in at over two hours in length, as “an in-depth look at what five boys from the wrong side of the tracks can achieve when motivated by the will to escape hard times, fueled by an unexplainable quest to destroy, live and be embraced by the love of fans that we had not had the pleasure of meeting yet. This is how it’s supposed to be; rock solid!”

Singer Philip Anselmo clarifies Keenan’s remarks a bit, adding, “This is a semi-ugly glimpse into what would end up the perfect building blocks to a much more prosperous future!” A version of Diary of a Mad Band on vinyl and with the DVD drops Oct. 26.

The concerts happens at the Joshua Tree Lake Campground in Joshua Tree about 15 miles from Twentynine Palms. You can bring your own food to the show, and camping is available on a first-come, first-served basis. More info at joshuatreemusicfestival.com.

With a reputation forged in fire, brimstone and magic, Killing Joke has long been one of rock’s most iconic and influential outfits. Now 30 years after “bonding in blood,” the band’s original lineup is set to release their 13th studio album, Absolute Dissent. Big Paul Ferguson, the band’s drummer, once described Killing Joke’s music as “the sound of the earth vomiting,” a sound that resonated with everyone from Led Zeppelin guitarist Jimmy Page to Smashing Pumpkins frontman Billy Corgan.

No more time off for A Perfect Circle: The band is about to embark on a brief tour that’ll include a three-night stand at the Avalon. On Nov. 8 the band plays their Mer de Noms album in its entirety, on Nov. 9 it’s Thirteenth Step’s turn and the trio of gigs wraps Nov. 10 with a complete performance of eMOTIVe.