AIDS: Don’t Get Scared, Get Tested 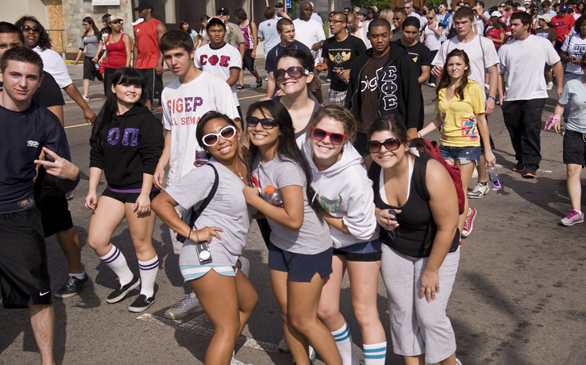 College is a time of self-discovery. Students often choose to spread their wings and explore a number of interests, including religious freedom, political ties and sexuality. However, with the latter comes a wealth of responsibility – something that many students are unprepared to handle. According to the Centers for Disease Control, an estimated 40,059 young people in the United States have received a diagnosis of AIDS. Even more startling is that an estimated 10,129 young people with AIDS have died. What this means is that despite the wealth of information about HIV and AIDS available to adults aged 18-25, the message just isn’t being received.

The first AIDS case in America was diagnosed April 24, 1980, in a San Francisco resident named Ken Home. It was assumed that HIV/AIDS was a gay epidemic, due to its prevalence among homosexual men. But just as the disease “jumped” from primates to humans in the 20th century, AIDS soon found its way into the mainstream through blood transfusions, heterosexual sex and intravenous drug use. National task forces would be assembled. The disease would divide towns and even families. But more importantly, it created a number of unlikely heroes in the people it has encountered.

Teenager Ryan White contracted the disease in his youth. He was a hemophiliac – a disorder, usually occurring in males, which prohibits the blood from clotting, and therefore, requires regular blood transfusions. When the people in his town of Kokomo, Ind., found out about his diagnosis, White and his family were virtually shunned. He was denied access to his school. Parents would not allow him contact with their children. White soon rose to national attention, attracting the support of notable entertainers such as Michael Jackson and Elton John, who maintained a friendship with the teen until his death in 1990. He was 18.

Gia Carangi was only 26 years old when she succumbed to an AIDS-related disease. Carangi was a dark-haired supermodel in a time when many of the top faces had blonde hair and blue eyes. She had grown up in Philadelphia, but moved to New York City to pursue her career. While there, Carangi quickly garnered a name for herself, gracing the covers of Vogue and Cosmopolitan magazines. However, she was also addicted to heroin. Her proclivity for sharing needles with other addicts soon took its toll. She contracted the disease and died at Hahnemann University Hospital Nov. 18, 1986.

Earvin “Magic” Johnson for many was the most surprising diagnosis. The star player for the Los Angeles Lakers came forward with news that he had contracted the disease just before the 1991-1992 basketball season and that his years of unprotected sexual activity were to blame. Since coming forward, Johnson has shown that being HIV-positive is not a death sentence, but it can be managed through drug treatment, a positive attitude and healthy living.

Aside from patients speaking out to educate the public about the dangers of AIDS, there are a number of nonprofit groups that aim to do the same. AIDS Walk (aidswalk.net) is an annual walk-a-thon that has been going strong for over 20 years. Based in several cities, including New York and Los Angeles (Oct. 17), the fundraiser has helped bring awareness to prevention and maintenance by partnering with other charities and local businesses. The day of the event, thousands gather and walk across the city in a show of solidarity for those lost to AIDS. YouthAIDS (psi.org/youthaids) is also a well-known charity that has received a little help from some very well-known friends. Pink, Alicia Keys, Amanda Bynes and Benji and Joel Madden have lent their celebrity to the organization, which was founded by the Aldo Shoes company.

Remember, HIV/AIDS is spread through unprotected sexual contact, the sharing of needles and infected fluid transfer (including semen, blood and breast milk). Young people are urged to get tested at least once a year if practicing safe sex and every three months if regularly engaged in sexual activity. Latex condoms when used correctly may decrease the likelihood of contracting AIDS, but testing is still necessary since condoms are not 100 percent effective.