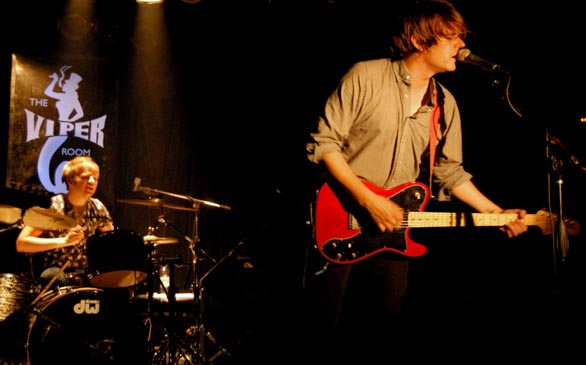 After completing an extensive North American summer tour with Hot Hot Heat, Cage the Elephant and Band of Skulls, British rock band 22-20s stopped by the Sunset Strip for an intimate performance. The quartet act made excellent use of the Viper Room stage as they delivered elements of soft blues mixed with melodies and rhythms to garage rock jam sessions.

The shared magnetism as the spotlights shined on each member radiated energy across the stage. People in attendance who were foreign to 22-20s quickly began to sway left and right as the crowd grew larger. The curiosity level forced everyone to press against the stage as the songs transcended from poppy blues to a new age classic rock. The group played their hits “Devil in Me” and “Such a Fool” from their self-titled 2004 album, plus “Bitter Pills” and “Heart of a String” off the Shake/Shiver/Moan record released this past spring.

Lead singer Martin Trimble was spectacular onstage. The soft vocal tones wandered smoothly with his guitar in hand. The live performance matched the album sound greatly, allowing every word to be perfectly heard across the room. Guitarist Dan Hare participated in a few face-off solos during tracks with Martin, which added a perfect transition between choruses. This invited Glen Bartup on drums and bassist James Irving to deliver a remarkable jam session for the Los Angeles crowd drifting back from gentle sounds to classic rock and roll shredding in unison.

22-20s exuded a sophisticated demeanor that included confidence, electricity and British swagger. They definitely have the energy and stage presence to deliver outstanding events. Unfortunately, the band heads out for a fall tour in the United Kingdom and Japan next month. When they return I highly recommend catching a show or two. It will make you Shake/Shiver/Moan.