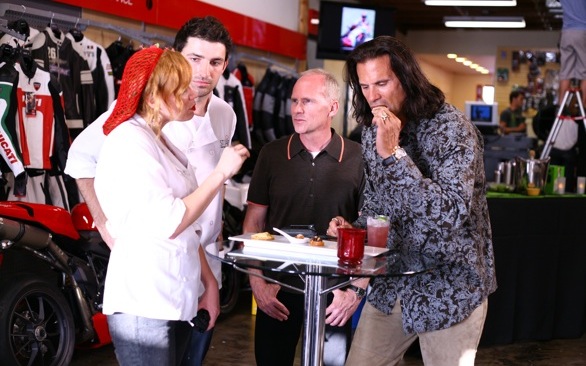 When I was in high school, I had the following obsessions: anything 1970s, anything on Food Network and a guy who looked exactly like Greg Brady.

To find myself in the kitchen preparing a meal for Christopher Knight, aka Peter Brady, and his wife Adrianne Curry while shooting the second season of my Food Network series, “Private Chefs of Beverly Hills,” takes a teenage dream, rolls it in rad dust, dips it in awesome sauce and serves it up on a silver platter. All I need now is for my unrequited Barry Williams look-a-like love to walk through the door and ask me to prom.

In Hollywood, you see and work with famous people all the time. But having the chance to cook for a childhood icon reduces me to a goofy, grinning, giddy idiot, and this season it happened more than once.

In this season’s first episode, I was sent to cater a Ducati launch party hosted by Lorenzo Lamas. Hello, “Renegade!” Here we are hanging in a bike shop as he eats my Renegade Rosemary and Dulce de Leche Apple Empanada, calling it a “parade of flavors.” The man was on “Falcon Crest” for crying out loud. And in Grease!

A few days later, while cooking for Alison Sweeney (“The Biggest Loser,” “Days of Our Lives”), I was told a special guest was coming to dinner, but instead of a name, I was given the clue: “Hot chips.” Thinking for a second, I suddenly shrieked, “ERIK ESTRADA!” It made sense: Lorenzo, Peter Brady, Erik Estrada. That would be the retro TV trifecta! Turns out it was Ali Landry, the former Doritos girl. Though she was absolutely lovely, I spent the rest of the night a little bummed she wasn’t Ponch.