My Soul To Take: Wes Craven is back in a new dimension. 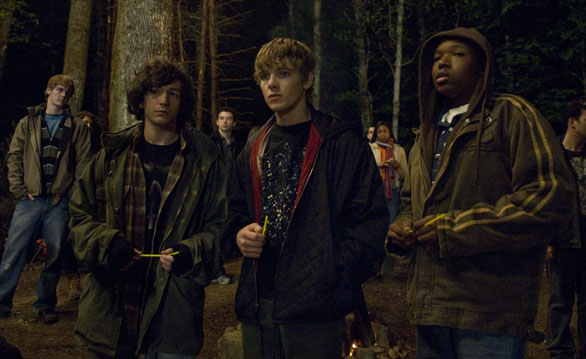 3-D flicks are all the rage these days. Just ask actor Denzel Whitaker, who stars in Wes Craven’s latest 3-D horror film, My Soul to Take.

“People get a kick out of it, and it’s another way of delivering media and revamping the experience of going to the movies,” says Whitaker.

“It’s enjoyable and is really striking the interest of a lot of different people, for now you are going to the movies and being involved in the film,” adds the 20-year-old actor who made his feature debut in the movie The Great Debaters alongside his mentor Denzel Washington.

Written and directed by Wes Craven (A Nightmare on Elm Street, The Hills Have Eyes, Scream), the movie tells the story of a serial killer with multiple personalities, and Whitaker is part of a young teenage cast that includes Max Thieriot, Emily Meade, Nick Lashaway and Shareeka Epps.

“I play a blind character and that was interesting to me because I thought that it would be a test to my skills as an actor,” says Whitaker, who studied Jamie Foxx’s role in Ray and Val Kilmer’s At First Sight to perfect his part.

“I also literally walked around the house with a blindfold on trying to navigate my way through the house, which to my surprise wasn’t a great success, but it wasn’t a great failure, either. It’s my first time doing a project without sight, and you have to rely on your other senses. You really start to feel and hear things that you haven’t heard before or paid attention to,” he says.

Billed as a suspenseful thriller, My Soul to Take is based on the fictional legend of a serial killer called the Riverton Ripper, who returns to avenge his death in the town of Riverton, Mass., by murdering the seven children born the night he died, and it echoes similarities to Craven’s A Nightmare on Elm Street.

“It is a Wes movie and Nightmare on Elm Street is where he got his background, so a lot of his films do have an element from that movie, if you take a look at them,” says Whitaker, who prefers the sci-fi genre but was drawn to the movie because of Craven’s attachment to the project.

“I try to pick projects that have some substance, and I don’t let the paycheck drive my decision,” he assures. “I picked this project because not only would I be working with Wes and a great cast, the 3-D on this movie is really striking and will immerse you into the horror world, and hopefully do something you haven’t seen before.”