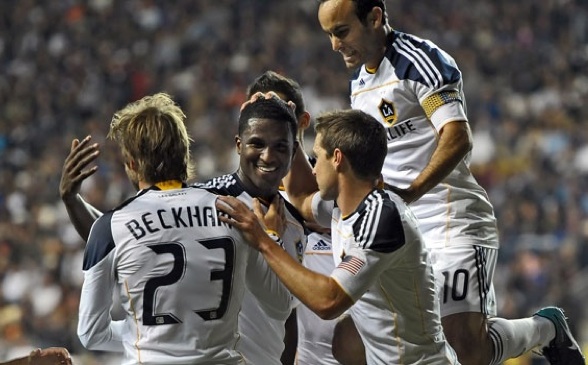 The Galaxy celebrate a 1-0 win over the Philadelphia Union.
(Credit: lagalaxy.com)

Forward Edson Buddle netted his 16th goal of the season to lift the Galaxy past their Union hosts, 1-0, in Philadelphia in the team’s last road game.

“Well, it was a good win for us. We didn’t play particularly well but [had] a short week and travel across the country,” head coach Bruce Arena says. “Give our guys a lot of credit.”

The Galaxy carry an overall record of 17-6-5 for a total of 56 points, which are both an MLS best thus far. Los Angeles already has qualified for the playoffs but now are battling to gain home-field advantage throughout the postseason until reaching the MLS Cup for the second straight campaign.

Buddle is continuing his display en route to winning the golden boot of the league, which he currently leads. His 16th goal came via a header off midfielder David Beckham’s corner kick from the right flank.

“We made several runs like that one during the game, and this time we put it in,” Buddle states.

The ball landed atop of the goalkeeper box to an almost unmarked Buddle in the 27th minute of the first half.

“I had my chance on the corner and I knew if I put it in position, it would go in. I knew that if I put it in the right area we would score,” Beckham says.

Both Buddle and Beckham celebrated thereafter for a few moments on the wonderful connection, which led to the Galaxy’s second consecutive victory.

Los Angeles now has two remaining games at home, starting with an affair against the Colorado Rapids Saturday, Oct. 16, at 7:30 p.m. at the Home Depot Center before closing out the 2010 season hosting FC Dallas Oct. 24 at 5 p.m.

Defense is essential for Los Angeles.