USC, UCLA Stumble Against Nor Cal 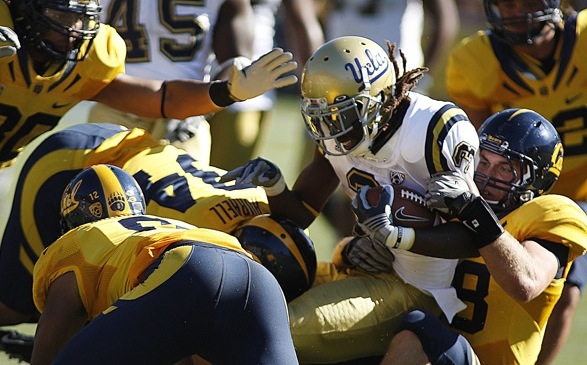 The UCLA Bruins failed to capitalize on a momentum swing they had going, falling to host California, 35-7, in Berkeley.

One positive thing that came out of this result is that the Bruins do not face any more Northern California teams this season, having lost to Stanford at home in terrible fashion weeks ago.

“It was a series of unfortunate events,” UCLA quarterback Kevin Prince comments. “They came out and scored right away. We kind of got out of sync.”

Prince was entirely correct because the Bears scored by the 10:29 mark to take an early 7-0 edge over the Bruins. Four and a half minutes later, Cal added another TD to truly begin the impending pounding.

The only Bruin touchdown came in the third quarter when Prince delivered a pass to Christian Ramirez for the six-yard quarterback-receiver connection. Cal added another TD in the fourth quarter to seal the scoring for the game.

“Cal is one of the reasons why we haven’t been able to reach our goals,” free safety Rahim Moore points out. “We always lose to these teams like Cal.”

UCLA does not have it any easier Thursday, Oct. 21, since they must travel to Eugene to face the No. 2-ranked Oregon Ducks at 6 p.m.

“We wanted to get an important win going into Oregon,” Prince states. “That would have built momentum for this program and this team.”

“We are so close to being good,” USC head coach Lane Kiffin says. “But we are not there yet.”

The loss drops the Trojans to 4-2 for the year, while being 1-2 in the strong Pac-10. Stanford, who is ranked No. 14, improve to 5-1 overall and 2-1 in conference action. “It was going to be pretty much a three and a half hour arm wrestling match,” Stanford head coach Jim Harbaugh states.

The Cardinal are still in the hunt for the Rose Bowl after the win.

USC managed a 7-0 edge minutes into the affair with a rushing touchdown from Dillon Baxter, but Stanford responded with a Doug Baldwin-caught touchdown pass from quarterback Andrew Luck. The home team then took a 14-7 lead, but the Trojans tied the score with 4:23 remaining before halftime.

“You have to have confidence,” Luck says of the team’s outcome on beating the highly talented Southern California squad. “I thought we could get it done.”

The second half of the game proved to be the same back-and-forth play as the previous half, with Stanford scoring first to take a 21-14 advantage. USC only managed to capture another lead at 1:12 before the game ended, but the Cardinal had one more drive in them. USC’s defense let the squad down yet again as Nate Whitaker kicked a 30-yard field goal to give the hosts the eventual two-point win.

“We’re at the lowest of the lows,” USC quarterback Matt Barkley confesses. “And it’s very tough because we were at the highest of the highs just two weeks ago.”

For the game, Barkley passed for 390 yards and three touchdowns on 28-of-45 attempts. The rushing game was somewhat notable, but the receivers made more noise this time. Led by Robert Woods, USC’s passing game had no answer. Woods caught 12 receptions for a whopping 224 yards and an impressive three TDs.

The Cardinal had a more balanced attack with its prime individuals, led by Luck’s 285 passing yards and three TDs. Stepfan Taylor amounted 104 rushing yards on 23 carries and a touchdown, while three different receivers collected 46 yards or more. Baldwin had eight catches for 98 yards and two TDs.

USC is looking to get back to their winning ways, hosting Cal Saturday, Oct. 16, at 12:30 p.m. at the Los Angeles Coliseum.