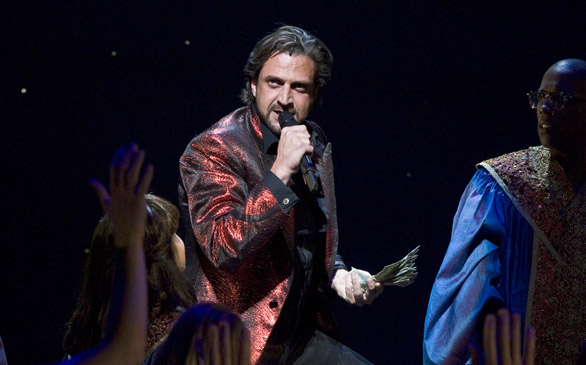 Alan Menken’s score, Glenn Slater’s lyrics and a book by Slater and Janus Cercone make “Leap of Faith” an inspiring and heartfelt story. The music itself is refreshing and different from what Menken (The Little Mermaid, Beauty and the Beast) fans are accustomed to. It’s a touch less dramatic but still offers a wonderfully melodic essence.

The choir scenes “Step Into the Light” and “Rise Up” are brilliantly written and executed. They play out to look identical to an actual setting of a revival in a backwoods town.

Raúl Esparza is stunning as the conniving preacher man who fatefully visits the town of Sweetwater. He is a mega rock star in this role.

When it comes to acting, Brooke Shields is just as true to her character as always. Unfortunately, her singing cannot even begin to compete with the other talented voices on stage. But you have to give her credit for her unwavering commitment to the acting.

Another performer of note was Leslie Odom, Jr. (Ricky) who plays the brown nosing son of one of the women’s choir leaders, Ida Mae (Kecia Lewis Evans). He’s a great actor, but his voice is one that will make you melt. The audience gasped every time he uttered a note. He is so enthralling it’s impossible not to be astonished by his scrumptious voice.

The score is moving, but the catchy and epic songs were few and far between. The choreography was gorgeous. It set the scene the moment the curtain opened for the overture. The dancing and staging kept the show on its feet.