Leaves of Grass, Splice and More 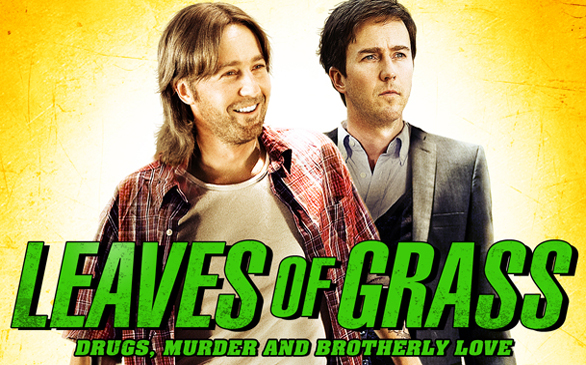 Under the Radar: Edward Norton stars as identical twin brothers who couldn’t be more different in the stoner crime comedy Leaves of Grass, written and directed by Tim Blake Nelson. A straight-laced philosophy professor gets caught up in his stoner brother’s crazy schemes, coming into contact with a cast of eccentrics played by Susan Sarandon, Richard Dreyfuss and Keri Russell.

Funny Business: The biggest comedy of recent years, The Hangover now comes in a new Extreme Edition, which features a photo album with new pictures of the gang’s debauchery, gag reels, improv outtakes from the hilarious Ken Jeong and more.

Get more nostalgia for your buck with the ’80s Movies 6 Pack. Included are classic teen comedies Valley Girl, The Rachel Papers, Losin’ It, The Last American Virgin, Class and Zapped! starring the likes of Nicolas Cage, Tom Cruise and Rob Lowe.

The Idiotbox: Based on the DC comic, Human Target: The Complete First Season is an over-the-top action thriller about the ultimate bodyguard, Christopher Chance. When gangs target a D.A., Chance is the man called in. Chi McBride and the versatile Jackie Earle Haley are his crew.

Jonathan Rhys Meyers returns one last time for Showtime’s lush tale of the beheading-happy Henry VIII in The Tudors: The Final Season. Impeccable production design, superb performances and scandalous plots make for a great end of the series.

One of Britain’s comedy greats, Benny Hill revolutionized the sketch variety show. Now, 58 uncut episodes of “The Benny Hill Show” are available along with several documentaries in Benny Hill: The Complete Megaset - The Thames Years 1969-1989.

In Toon: Some of DC’s greatest heroes team up for Superman/Batman: Apocalypse, which tells the origin tale of Supergirl. A spaceship from Krypton lands on Earth. When Darkseid kidnaps the girl, it’s up to Batman and Superman to save her.

The Horror! The Horror! Splice stars Adrien Brody and Sarah Polley as two scientists who create a human-animal genetic hybrid only to have the experiment go very, very wrong. Vincenzo Natali (Cube) directed and co-wrote this original sci-fi thriller.

Freddy’s back in the remake of A Nightmare on Elm Street. Jackie Earle Haley (Watchmen) is the perfect choice to don the glove and fedora.

During a storm, a crew is stranded on an oil rig in the middle of the ocean when they discover something is hunting them in The Rig. William Forsythe stars.

Tis the Season? If you’re one who thinks it’s never too early to get in the holiday spirit, then you’re in luck. Kermit, Fozzie, Miss Piggy and the gang parody just about every holiday movie under the sun in It’s A Very Merry Muppet Christmas Movie. Along for the ride are Joan Cusack, David Arquette and Whoopi Goldberg.

Blu Notes: Finally back as they were meant to be seen, Quentin Tarantino and Robert Rodriguez’s double feature pastiche of ’70s exploitation flicks come to hi-def in Grindhouse: Special Edition.