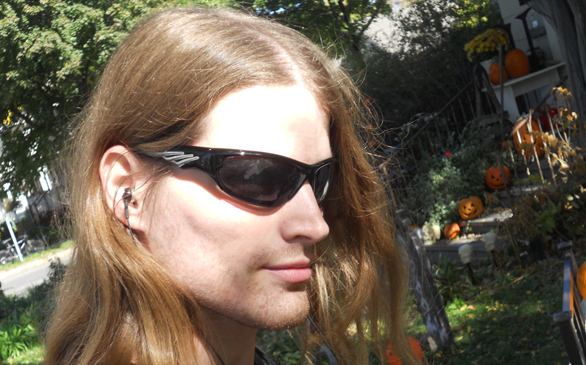 My name is Amit Tishler, and I’m a 28-year-old animator/filmmaker. I was born in the city of Tel Aviv, Israel, where I studied my first degree in animation at Bezalel Academy of Arts and Design, Jerusalem, with a focus on my favorite technique, classic 2-D animation. My graduation project was an animated short, Born To Be Dead, which has been screened in several animation festivals – in New York and Brazil – and will be featured in this week’s Big Bear Horror Film Festival in California Oct. 15-17.

Set in the flaming pits of Hell, the film tells the story of a cute little girl who is banished from Heaven straight into the fires of Hell. The dark minions quickly learn that if nothing will be done about their new unwelcome guest, their lives will turn into a living hell.

The film was produced in classic frame-by-frame 2-D animation, using more than 1,000 hand-drawn frames. I drew the entire film in about eight months entirely out of my student apartment in Jerusalem, Israel.

After graduating from Bezalel, I worked for two years in the Israeli industry as both a full-time and freelance Flash animator for several studios and software companies. I also worked as a character designer in both Flash and the classic hand-drawn techniques.

During this period, I also found time to work on several independent films, including Winterhunt. The film was digitally produced using Flash, combining classic animation elements with cutout animation techniques. Production ended in about three months from my previous Tel Aviv, Israel, home.

After seeing Winterhunt in the January screening of the Hollywood Shorts festival in Los Angeles, Big Bear Horror Film Festival (BBHFF) director Michael Coulombe contacted me and generously offered to send my film to his upcoming 2010 BBHFF.

Over the last year I’ve been in touch with festival directors Jamie Kristen and Michael Coulombe, and after accepting both Born To Be Dead and Winterhunt to the 2010 festival, I animated a teaser trailer for the festival in order to help them promote their great event.

Aside from the screenings of Born To Be Dead and Winterhunt, I will also attend a Q&A session and will hand out the award for Best Animated Short in the award ceremony, which will be held on the last day of the festival.

These days I’m studying at the Minneapolis College of Art and Design (MCAD), working toward a Master of Fine Arts. I specialize in 2-D animation, Flash Animation, concept art and character design. I’m hoping to one day be able produce my own stories and ideas in both live-action and animation genres.

This festival has presented me with a great opportunity to show my work and feel more than welcome in the local scene.

Interviews
Ai Weiwei on activism in the US, his art response to COVID-19 and a secret Wuhan film
625 views

Interviews
James Bond producer: 007 ‘can be of any color’ but never a woman
1,867 views