Conviction: Hilary Swank won’t back down. 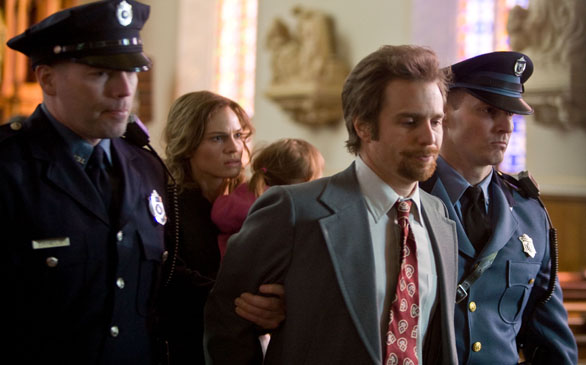 Seated at the far end of the table beside a few familiar faces is a timid woman who looks extraordinarily good for her age. She is not in the “industry,” and she certainly has never been at anything like a film’s press conference before. Despite the magnitude of talent that surrounds her, she manages to steal the attention of everyone in the room.

From her quiet and non-domineering demeanor, Betty Anne Waters doesn’t look or sound like any lawyer in the movies. She was a stay-at-home mom and wife from Rhode Island who had dedicated her life to taking care of her family. So when her brother Kenny was wrongfully convicted and sentenced to life in jail for a murder he did not commit, Betty Anne found the obvious solution. She went to law school, passed the bar exam and uncovered evidence to free her brother after 19 years of imprisonment.

“I took one day at a time,” says an emotional Betty Anne. “I didn’t know how long it would take.”

Oscar winner Hilary Swank stars as Betty Anne in Conviction, which follows the saga initiated by the wicked Massachusetts sheriff (played by the wonderful Melissa Leo) who skewed witness testimony and evidence to convict Kenny Waters (the always-enjoyable Sam Rockwell) of the crime.

“There are faults in our legal system to say the least,” says Swank, who admitted to being nervous about portraying her living hero. “Betty Anne and Kenny’s story is a sad and enlightening reminder of that. When you think of the death of Kenny’s soul in prison for a murder he didn’t commit. It’s people right now living that life, right now as we sit here talking about it. It’s unfathomable.”

Actor-turned-director Tony Goldwyn was also touched by the story and set out to make a film that was true to the spirit of the characters and the message their struggle relays to his audience.

“I hope that people will look at those they love and think about what they are willing to do for the people they care most about in life,” enthuses Goldwyn. “What made me want to tell this story beyond the extraordinariness of Betty Anne’s achievements was the bond between these two people and the love they share. The thing we all crave in our lives is that human connection.”

Juliette Lewis plays Kenny’s ex-girlfriend and false witness who helped convict him. In a role that requires brash unintelligence and a sense of humor, Lewis was excited, and maybe a bit hesitant, at approaching it.

“The bad grammar, the made-up words that don’t exist,” lists a jovial Lewis about her first impression of the character. “When I saw the script, I was like, ‘Do you want to fix this word?’ She’s a web spinner. It’s a shady existence. For me, it’s a pleasure because I work in energies. This is a person with a disruptive energy. I wanted to play a person that shakes up your space. I want, when the scene is done, for you to take a deep breath.”

However, Swank and acting veteran Minnie Driver, who plays Betty Anne’s real-life best friend Abra Rice, were more than happy to gush about the women who lived the movie.

“She is your angel,” says Driver about Rice. “She was this hilarious, witty underlay for what was going on in Betty Anne’s life. She is rip-roaringly funny. She’s heaven.”

“Betty Anne is my real-life hero,” says an emotional Swank. “It’s really hard to compare my life to Betty Anne’s. I’m someone who plays heroes like Betty Anne in the movies. I’m just an actor. I didn’t give my life of service to anyone but myself.”

To add to the amazing story, it is a miracle the film was completed. The cast and crew were forced to reshoot a pivotal scene, which sent them back to the real prison where the film had been set. Though it worked out in the end, the cast is ablaze with anguished laughter about the situation.

“The film, on its way to the lab, was X-rayed at the airport,” explains the director. “Even though all the way around the film canister said, ‘Do not X-ray. Do not X-ray.’ It was very traumatic.”