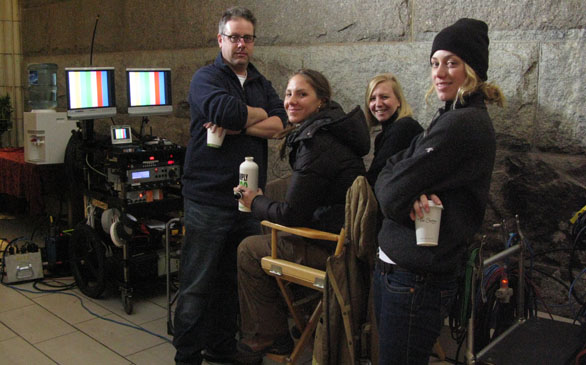 It’s a fact universally acknowledged that making a film does not purely rely on the actors you see on the screen or the guys who turn on the equipment. There is an underworld to the filmmaking process that is kept relatively under wraps, one that is imperative to production. Appropriately donning the title of producer, these people do … what? We’re not quite sure.

There is a measure of ambiguity as to the strict duties of a producer. Without getting into too much tedious fluff, a prudently overreaching definition would include key words like meetings, scripts and deals. But straight from the producer’s mouth, Emily Ziff provides a more sufficient explanation.

“It’s about the two-fold task of trying to push every project forward in incremental ways. Hand in hand with that is the constant look for new projects and ideas and artists and filmmakers and writers and things that could potentially be film or television projects. That’s everything from phone calls to e-mails to reading to sitting and trying to think about what to do.”

Ziff is a film producer and co-founder of New York-based Cooper’s Town Productions (Her partner is Oscar-winning thespian Philip Seymour Hoffman). She graduated from Brown University where she studied Art Semiotics, a seemingly futile degree for post-grad job prospects, but one that she finds a refreshing alternative to the stodgy art society.

“I would tell my mother, so that she could tell her friends, it was the study of how images make meaning. That’s the simple answer, but I take that to heart. It’s pretty theory-based and experimental, and it’s definitely a different world than what I do now.”

Her current world still revolves around images, but in a much different context. Like many of Hollywood’s elite, Ziff did not enter the biz looking to produce. After returning directly to her hometown of New York City following her college years in Rhode Island, Ziff was swept up in the city’s prosperous environment, which was an identifiable factor in shaping her professional prospects, not her Ivy League degree.

“It was a great time for this industry,” says a reminiscent Ziff. “In New York, there was a lot going on at this time. There were a lot of young people going into film, and there was a lot of independent production happening here. It was doable to get a job in the business and work your way up.”

Ziff did work her way up, relying on dedication, a little luck and the contacts she made. Davien Littlefield was managing actors and celebrity clients when she and Ziff first met. Ready to take a sabbatical, Littlefield recommended her new protégé for the job as an assistant that would evolve into a lifelong career. She became Hoffman’s assistant for several years until they became partners in a company that produced most of the actor’s recent films.

“He’s just an extraordinarily gifted person,” effuses Ziff about her business partner and self-professed mentor. “He is highly intelligent and incredibly creative, and he’s insanely gifted at knowing what makes a story come alive. It’s pretty special to be around someone with that intelligence and power.”

Their latest venture is the critically acclaimed film Jack Goes Boating, based on the 2007 play of the same name. An off-center romantic comedy based in New York, the play received positive reviews when it ran for six weeks in Manhattan. The play starred Hoffman, John Ortiz and Daphne Rubin-Vega, who were eager to reprise their roles for the film adaptation.

“I felt compelled by it,” explains Ziff, who naturally produced under the company’s banner. “I remember seeing the play for the first time and thinking that it had a cinematic quality, and the characters had more to say than they were able to on the stage. The film felt very organic and logical.”

Jack Goes Boating is currently in theaters, and though Ziff acts as any good producer should, passionately promoting her product, she also radiates her obvious and genuine ardor for her work.

“I’m always interested in things that feel simultaneously familiar and totally new,” offers Ziff. “By new, I mean something that I can recognize as particularly human and what it means to be a person on this earth. But there should also be a revelation. It has to be personal on some level. I have to find myself in it.”