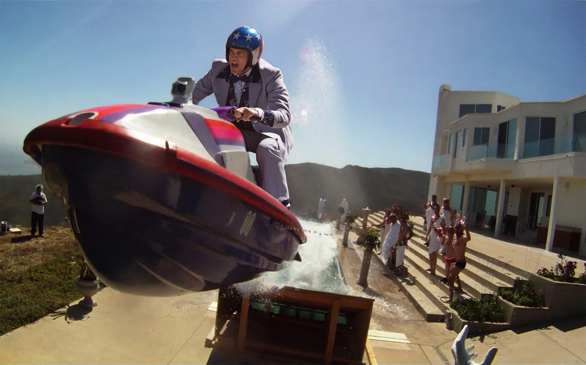 Johnny Knoxville and the guys are back in Jackass 3D.
(Credit: Courtesy of Paramount Pictures)

When “Jackass” appeared on MTV in 2000, it was an instant sensation. The show combined the best in everything from outlandish potty gags to pranks involving grown men getting kicked in the junk by livestock. The stars of the show – Johnny Knoxville, Bam Margera, Steve-O, Chris Pontius, Ryan Dunn, Wee-Man, Ehren McGherey and many of their cohorts – became instant pop culture sensations. Not only that, but the series soon gave way to not one, not two, but now three feature films rife with enough gross-out humor to literally make audiences puke.

Jackass 3D is the first of the franchise’s films to be shot in 3-D. The technology has reinvigorated the film industry, as evidenced in the box office receipts of Avatar and Alice in Wonderland. But when paired with the kind of content that made “Jackass” such a success, the only proper response to give moviegoers is: Watch out!

Written by Preston Lacy and directed by Jeff Tremaine, Jackass 3D rehashes a number of old familiar favorites. Pro-skater Margera still manages to harass his long-suffering parents Phil and April with prank-after-pulse-pounding prank (this time, including a fake gorilla). Pontius still holds down the fort, prancing around butt naked and subjecting his member to painful stunts. Famed director Spike Jonze (Where the Wild Things Are) even gets back into the action. Jonze, throughout the years, has been a featured guest star and contributor on both the series and in the movies. Only this time around, his schedule was finally clear enough to allow him to participate in the shenanigans, full time. And of course, Wee-Man is beloved as ever, being utilized in several stunts involving his diminutive size (like being glued to other members of the cast). But the latest Jackass in many ways seems to take things up a notch so that it will be almost impossible to top if there is ever another incarnation. According to Knoxville, this was intentional.

This concern is in some ways valid. Neither “Jackass” nor any of its spinoffs are currently in rotation on MTV. Even the anticipated hit “The Dudesons” (who make a cameo appearance in Jackass 3D) failed to capture ratings in the same way that shows such as “Jersey Shore” have.

As a result, early screenings of Jackass 3D were conducted around Los Angeles. The cast showcased its latest opus in such winning cultural locales as Silver Lake gay bars and nursing homes. Knoxville knew he and his buddies had a huge hit on their hands based on the responses they got from viewers.

“‘We’d like to see more penis,’” he says, impersonating some of the elderly women who were shown the film.

This request might seem surprising given the myriad sex toy gags and nude bodies running around. But these jokes are mild in comparison to some of the other breakout moments in Jackass 3D. A scene starring Lacy and the gang and featuring documentary filmmaker Lance Bangs is so gross that many in the audience may have trouble sitting through it (Let’s just say that it substantiates the theory of “The Domino Effect.”).

The actors admit that their need to make each other sick for the purposes of humor often leads to some tense moments on set. They collectively cite “prison rules” as the overall guy code. This means that they each unleash a ferocious prank on whomever they can right out of the gate to keep the other actors at bay.

“You’ve got to prove that you’re not to be fucked with,” says Steve-O.

Margera could have used this advice during production. He was not so lucky when his friends retaliated against him for his frequent urination on them by trapping him in a hole and dropping live snakes (including a huge boa constrictor) down on him as he practically burst into tears. This is already funny, but it’s even worse when you take into consideration that Margera is deathly fearful of snakes.

Ah ... just another day at the office.