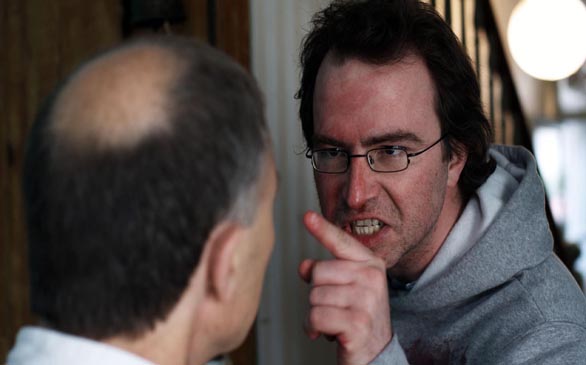 A dark British comedy with a sketchy plot and setting that revolve almost entirely around the family home, this debut feature film from Ben Wheatley charts two weeks in the lives of a father and son who have just returned from a stint in jail.

Bill (Robert Hill) and Karl (Robin Hill) play a pair of crooks released from prison who become preoccupied with figuring out who turned them in to the cops. Adding to their woes, their crime caper family business is in shambles, plagued with infighting, Karl’s estranged girlfriend Valda (Kerry Peacock) is unexpectedly pregnant and Bill’s wife Maggie (Julia Deakin) is fed up with it all. After identifying the snitch, some muscle is called in to eradicate the criminal, but there are further complications when he arrives with his toddler in tow.

A rather interesting character study about a family of crooks dealing with daily issues in the crime world, Down Terrace makes a great show of reflecting a certain British multiculturalism. The dialogue is fairly witty with some sadistic humor, but the flick is weighed down with editing and pacing issues.

Much of the first half hour is spent in idle banter as they ponder the likely identity of the snitch, laying out a series of traps and ruses for their associates – including a shady nightclub manager (Tony Way) and their well-connected Uncle Eric (David Schaal) – who all drop by the terraced house for a cup of tea. As father and son try to keep their criminal enterprise from falling apart, paranoia hangs in the air as everyone suspects the other. By the time the snitch is identified, Down Terrace really starts to lose momentum.