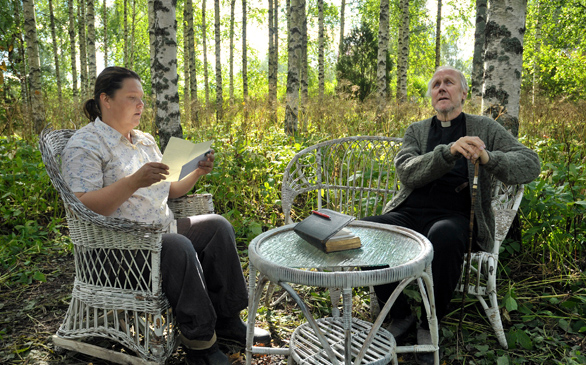 Married almost always to faith is doubt (and vice versa). In Letters to Father Jacob (Postia pappi Jaakobille), a blind priest and a former prisoner must struggle through their share of doubts together so that they might ultimately experience a pure and honest faith.

When Father Jacob (Heikki Nousiainen) pardons Leila Sten (Kaarina Hazard), she becomes indebted to him by helping him read and respond to letters he receives from wounded souls.

Aside from a suspicious postman Posteljooni (Jukka Keinonen) and a few townspeople, Hazard and Nousiainen are obligated to fill the screen for the entire film. For essentially a two-person show, the acting is superb and moving. When you have such a small cast, there has to be motion or some element to capture and hold the viewers’ attention. Cinematographer Tuomo Hutri does so marvelously.

Letters to Father Jacob has the power to both move audiences and encourage spiritual growth.