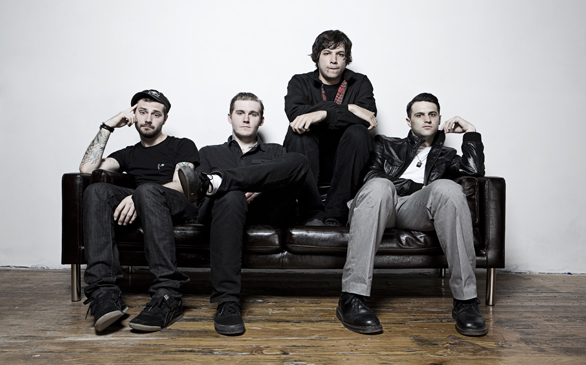 The Gaslight Anthem is just one of SideOneDummy’s many breakout bands.
(Credit: Ashley Maile)

For those of you who share in my passion for the indies (music, not women) and can’t quite get your fix on Z100, I’ve taken a break from scanning the depths of the blogosphere – from ChillMilk.com to Pitchfork – to compile a handy beginner’s guide to the indie label world.

Now that you’re in the throes of another year at school, it’s important to know what summer festival acts should be blasted out of your windows. You don’t want to start the year off labeled mainstream, dudes. So, here are 20-some labels guaranteed to bring the hipness:

À la so many indie labels before them, Alternative Tentacles (alternativetentacles.com) was a baby built so that a band could sells its singles. This time, Dead Kennedys were the creators of the San Francisco-based flagship. Still in alternative rock, check out Tentacles’ early compilation Let Them Eat Jellybeans! for that true American punk we all love. Since their the Dicks and Butthole Surfer days, they’ve branched out to the Hanson Brothers, M.I.A. and Alice Donut.

Might as well be called Sufjan Stevens & Friends, Asthmatic Kitty (asthmatickitty.com) is an indie formed by the musical community of Holland, Mich. Look to them for the musical epic-ness of Stevens (if he ever puts out another LP), and that almost electro-tinged Fol Chen. Now, the old Holland gang has dissipated a bit, and Asthmatic is basing out of Lander, Wyo., Indianapolis and New York. But the tunes are still fresh, and the label still independent.

Big Machine (bigmachinerecords.com) is an all-American indie focusing on all-American country music. Based out of homeland Nashville, Tenn., Big Machine has even earned itself a Grammy for Album of the Year (thanks, Ms. Swift).

Subsidiary imprint, the Valory Music Co. (thevalorymusicco.com), is also known for picking up some big names, including Jewel, Jimmy Wayne and Justin Moore. Watch out for newly-formed Republic Records Nashville as well, formed by Big Machine and Universal Republic in 2009.

Renowned for igniting the burgeoning Silver Lake music scene, Dangerbird (dangerbirdrecords.com) boasts one of the best “indie” rosters of the independent labels. First founded in 2004 by Jeff Castelaz and Peter Walker, Dangerbird gained repute in 2006 after releasing Carnavas, the debut full-length by Silversun Pickups. Since, Dangerbird has been on an expansion storm, first merging with Castelaz’s Cast Management in 2008, to later include publishing and merchandising, and now partnering with Rekords Rekords.

Notables: Silversun Pickups, Minus the Bear, the One AM Radio

Although based out of the wrong side of the pond, Domino (dominorecordco.com) has also been kicking jams stateside. More importantly, they were producing American artists during the Britpop era, when no one else would. Now, although still boasting international favorites Arctic Monkeys and the Kills, Domino is equivalently known for signing the cool kids out of Brooklyn and D.C.

Taking its name from a King Crimson song, Epitaph (epitaph.com) is the child of Bad Religion guitarist Brett Gurewitz. Based out of Hollywood, the label was originally “just a logo and a P.O. box” used to sell Bad Religion records. Since, the label evolved from its NOFX and Hives pop-punk days to its current post-hardcore and emo lineup. Epitaph frequently works and partners with several other indies, including ANTI-, Burning Heart, Fat Possum, Hellcat and Heart & Skull.

Founded at University of Florida in Gainesville by John Janick and Less Than Jake drummer/lyricist Vinnie Fiorello, Fueled by Ramen (fueledbyramen.com) is an emo-pop powerhouse. Now running out of NYC, the label has built a strong following by debuting the likes of Paramore, Jimmy Eat World and Yellowcard.

Founder Janick also joined forces with Fall Out Boy’s Pete Wentz to create imprint label, Decaydance (decaydance.com), premiering Panic! At the Disco in the process. Decaydance is its own ship now, but with so much artist crossover, you might as well couple the two.

Got some country in your blood? How about a twain in your talk? Check out Lost Highway (losthighwayrecords.com), a subsidiary of Universal Music Group Nashville. Not exactly an independent, Lost Highway made the list anyway given their ability to issue some great alternative rock and alternative country artists.

Chris Lombardi started Matador (matadorrecords.com) in 1989 in his New York City apartment. Cliché or not, Matador has grown into one of the best indie incubators since. Note a roster overflowing with buzz bands and alumni of the likes of Spoon, Pavement and Lou Reed. After a jaunt with the majors in the late-’90s, the label bought back a 49 percent stake previously sold to Capitol and has been co-owned by Beggars Group since 2002 – acquiring imprint label True Panther Sounds along the way.

Merge (mergerecords.com) is great. An indie out of Durham, N.C. – believe it or not – it has an incredible roster of musical talent. Founded by Superchunk members Laura Balance and Mac McCaughan in 1989, Marge has grown to represent indie sweethearts She & Him and the constantly praised Spoon.

Notables: She & Him, Spoon, Shout Out Louds, Arcade Fire

Megaforce (megaforcerecords.com) was formed when, at one time, no one would sign this small band named Metallica. Ever heard of them? Since, the label has kept a fresh group of heavy metal, hardcore punk and thrashers on tap. Think bands like Mind Funk and Five Finger Death Punch. A very artist-friendly label, Megaforce finances, develops, markets and distributes their talent all on their own.

Although the name might lend to a quick “corporate” designation, Green Label Sound (greenlabelsound.com) is, in fact, an exclusive singles label specializing in free downloads. Still a toddler, Green Label has spent its two years of existence promoting the hell out of Theophilus London, Chromeo and Neon Indian, among others. If nothing else, the label is worth its weight in gold relative to how much free content it premieres on its Web site.

One of the new favorites, Washington, D.C.’s Paw Tracks (paw-tracks.com) – formerly Soccer Star, then Animal – was initially created for the Animal Collective collective.

Since 2004, the label has been releasing records by other artists, including the Doldrums. But Animal Collective alone is enough to get Paw Tracks on this list – isn’t that like eight separate individual acts anyway?

Midwest favorite Polyvinyl (polyvinylrecords.com) shares its roots with several other indie labels – it was an extension of a self-published magazine, Polyvinyl Press, created by Matt Lunsford and Darcie Knight. Based out of Champaign-Urbana, Ill., Lunsford and Knight were fanboys of the local music scene and couldn’t help but get involved. Currently, their roster has nearly 20 bands and boasts the likes of Japandroids and Casiokids, among others.

Raise Up Music (raiseupthemusic.com) is an arm of Silverback Management. The extension is another step in creating a sort of full-service label for white-boy rasta music. Not really boasting much of a lineup just yet, Silverback’s weight will most likely lead to some serious growth in the near future. Go to Raise Up for the Pepper and Slightly Stoopids of the world.

After the fall of Man’s Ruin Records, Rekords Rekords (rekordsrekords.com) was established by Queens of the Stone Age and Them Crooked Vultures frontman Josh Homme as a vehicle to release his compilations, The Desert Sessions. Since, the primarily Silver Lake outfit has become a reliable name in metal and has recently tied the knot with Dangerbird. As Homme puts it, “It’s about the creation and releasing of music, period … Single, shmingle, just make a fucking piece of art.” Homme’s partner-in-crime, Alain Johannes, debuted his solo album, Spark, on Rekords as well.

Midheaven (midheaven.com) is a great way to get your fix of indie jams. They’re a San Francisco-based distributor focused on indie label CDs, vinyl, DVDs and everything else. They’ve even upgraded their site to include digital downloads at high speeds and with no DRM. So go get some indie tunes and share them with the masses!

Notables: The Pains of Being Pure at Heart, the Juan Maclean

Los Angeles-based SideOneDummy (sideonedummy.com) is geared more toward the punk rawkers than anyone else. Formed in 1995, the label has earned its reputation boasting eclectic acts ranging from Celtic rock Flogging Molly to third wave ska Bosstones. Basically, SideOne fans are whom you’d see at the Warped Tour. In fact, SideOne has released a compilation album in conjunction with the Warped Tour annually since 1998.

Bet you didn’t see this one coming? But yes, indeed, Tommy Boy (shop.tommyboy.com) is an indie. Started in 1981 by Tom Silverman, the label that brought you Coolio and De La Soul, severed its Warner Bros. ties in 2002 and was rebirthed as independent as the day it was born. Infamous for its contributions to the rap industry, Tommy Boy has expanded to include electronica and even a specialized Tommy Boy Silver label that focuses on LGBT-oriented content.

True Panther Sounds (truepanther.com) was recently acquired by another label on this list, Matador, but definitely deserves individual note. Run by Dean Bein, TPS is a hit machine and makes some great moderate-sized venue tunes. Check out Lemonade, Hunx and His Punx and Glasser.

Ol’ TeeVee Toons (tvtrecords.com) is 25 years deep, and has some 25 gold, platinum and multi-platis to its name. Would you expect any less from Harvard Law grad Steve Gottlieb? Known for his ability for artist discovery and development, Gottlieb and TVT have fostered multi-platinum careers for artists ranging from Nine Inch Nails to Lil Jon. Formerly the nation’s largest independent label, TVT has had major success without any major-label support. Of late, look at them for some fresh hip-hop.

Vagrant (vagrant.com) has recently come back into prominence as a fully independent label after splitting off of Interscope several years back. Known for breaking the Get Up Kids and Dashboard Confessional, Vagrant has continuously produced substantive acts and been a force on the summer circuit. Santa Monica’s own is still flexing the innovation with summer It-bands Edward Sharpe & The Magnetic Zeros and School of Seven Bells.

So Neil Young has a record label. The label’s name is Vapor (vaporrecords.com), and it’s the kind of label that everyone at SXSW talks about. Forget that his wife Pegi is one of their artists, they’ve got Everest and those Canadian new wave identical twins everyone keeps talking about. What were their names? Plus, Neil is there.

If you like music that scares me, this Chicago-based label founded by Tony Brummel is your jam. Initially more of a hardcore punk outfit, Victory (victoryrecords.com) has expanded to include indie rock, ska punk, emo and any sort of “core” you can think of – metal, hard, whatever. Victory really took off with Hawthorne Heights’ The Silence in Black and White and a couple of great records from Taking Back Sunday.

The stateside arm of the pioneering U.K. alternative/experimental indie label, Warp (warp.net) has earned quite the reputation for its electronic music scene, but has also spread itself among many other genres with some great acts, including Grizzly Bear. Warp has also set up Warp Films in addition to their three sub-labels, Gift, Lex and Arcola.

Notables: !!!, Aphex Twin, the Hundred in the Hands