Live Music for Under $25 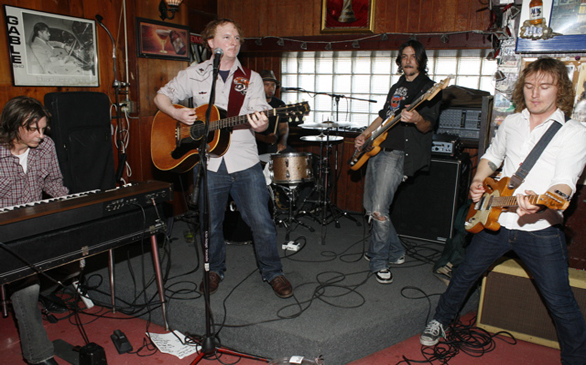 Los Angeles has so much great live music to offer, it’s too bad most of it is at such a premium. But don’t be too discouraged by Ticketmaster service charges, there are still plenty of ways to see some great acts in Hollyhood without busting mom and dad’s yacht fund. To help you guys out, we’ve compiled a list of some of the must-sees below. Most of these venues boast all-ages shows, but make sure you check before heading over without your fake – err, driver’s license – on hand.

Soul food and live blues music at Babe’s & Ricky’s Inn – that just sounds fun. B&R’s hosts some soulful shows at the intimate space. Mondays are your best bet since resident Mickey Champion hosts one hell of a jam night. Throw a Hamilton at the doorman, and you’ve got yourself a one-way ticket to Chicago and a late-night soul food buffet.

Monday at Spaceland is a great way to catch up-and-coming acts from the L.A. scene. Occasionally, you’ll see a touring act, but typically Spaceland showcases a different local band on residency every month. Alumni include Silversun Pickups, Rilo Kiley, Cold War Kids, Autolux and more. The crazy thing about all of this is that entrance is free. That’s right, you could see the next Silversun Pickups for free.

Perhaps the coolest name out of any of the listed venues, Zaaanzibaaar (née Zanzibar) is a great Santa Monica nightspot. Typically, the weekly schedule at Z’bar ranges from Afrobeat to electro, and everything in between. Mondays are a great night to head down. For $10, they’ll throw in a two-hour dance lesson to accompany the live salsa.

Literally meaning “go to sleep” en Francais, Fais Do-Do is a New Orleans-inspired jazz and blues club. Be careful treading down to the Southland venue as it’s definitely the seediest location in the bunch. Still, don’t miss the opportunity to catch a Fat Tuesday improvised jazz and experimental music jam session.

The club charges you nothing to get in so you can save your money for some beer and Cajun food (which is also cheap).

On the first and third Tuesday of every month until late fall, catch a ride to Little Tokyo. Tuesday Night Café is a performance festival featuring artists, poets, comedians and musicians galore. The acts are admittedly all local or “underground,” but you can’t complain with free entrance. Plus, every Tuesday Night rocks a completely new lineup. Why not grab a group of friends – or a date – and check out the public art series downtown?

The Wiltern is a converted, old Hollywood “glitz and glam” movie theater. Although recently renovated, the intimate venue has kept its quintessential vibe and continues to book some great acts. Unfortunately, all that art deco is going to cost you a little bit. Tickets usually run closer to $20 in addition to a convenience charge. But if you can see a band you like, there’s really no other reason to miss a trip to the legendary location.

Honky-tonk, square dance and slap leather, cowboys. Wednesday’s Charlotte Chamberlain’s Tip Jar is the best night to head to Culver City for the Americana live music showcase. Still quite the dive, the bluegrass/country rock jam fest won’t burn a hole in your pocket. With a zero dollar cover (every single night) to boot, there’s no reason not to mosey on down to “the Westside’s Home for Americana Music” for something different.

The Echo and Echoplex

Oh, Echo Park, how you scare and excite me simultaneously. The ultimate indie, unpretentious good time, the Echosphere is always a worthwhile trip. Wednesday’s Dub Club deserves particular mention and is known to host some of dancehall and reggae music’s finest. It’s usually 18-and-over to enter and may cost you $5 to $10 if there’s someone of note performing. Twice a month, you can also catch Bootie LA – an incredible mash-up dance party – at the Echoplex ($5 before 10 p.m., $10 after).

The Genghis Cohen Music Room within the namesake restaurant isn’t something to write home about, but it is an intimate 60-seat acoustic venue worth visiting.  Wednesdays host the Night Train Music Club at 9:30 p.m. ($8) and, albeit mellow, tend to be a great time. Most Wednesdays also host Jeff Young, formerly of Megadeth, playing some world-fusion. So if you’re ever hungry near 740 N. Fairfax (just north of Melrose), stop in for their Schezwan and stay for their live music.

It can be hit or miss with this place, but Thursday nights are usually a safe bet since the house band, the Starfuckers (with Guns N’ Roses member Gilby Clarke), play a great cover show. It may cost you a few bucks, but not too much considering it is live music. Founded by Stray Cat’s drummer Slim Jim Phantom, the Cat Club maintains the 1980’s big hair/big music feel, so expect to see some of the surviving West Hollywood rock star patrons. It’s loud, too, so consider earplugs before heading over.

Another old cinema convert à la the Wiltern or Avalon, the El Rey has kept its Hollywood charm. Really a staple in Los Angeles, the El Rey is a great alternative to the larger, basketball arena shows. The night of the week obviously depends on the lineup, but it’s never terribly pricey. Some shows float around $20, but you can easily find a great act for closer to $12.

The newly revamped Key Club is still a solid venue for live music. Some of the half-recognizable acts are overpriced, but you can definitely catch locals for under $20. The pretty cool scene is worth a trip. Similar to its WeHo strip neighbors (Whisky A Go-Go, the Viper Room), parking is tough, so prepare to pay for it.

OK, a night at Avalon may not be cheap, but it’s what you should do if you’re trying to have an epic Friday night in the heart of Hollywood. There’s so much going on in the venues within the Avalon complex (Bardot, Avaland, Control, Honey) that there’s something for everyone. Avalon’s reputation is especially strong amongst the EDC scene. Entrance is going to be $15 to $25, but it’s worthwhile to catch a great band or DJ set. You might be surprised to hear it’s 18-and-over on Friday nights.

Bootleg is an old 1930s bra factory turned artistic refuge for the Angeleno DIY scene. There are plenty of concerts, theater, film and dance events to keep this place full of cut-off jeans.

It seems everything but the instruments are made of plywood and inspiration. Bootleg takes intimate to a whole other level, as you usually will see band members setting up their own stage or sipping a beer right next to you. It’s one of those encouraging, always cool to stop by, artistic community-type places – so check it out. You’ll spend $12 at most to get in.

Heading to the Rox just makes you feel like you’re kind-of famous. The Roxy is another defining staple in the L.A. music scene. Depending on the show, tickets can cost you anywhere from nothing to “eff that” prices, so do your diligence. Make sure to avoid the Monday night “Spin the Bottle” high school party and lookout for the KROQ “Locals Only” nights. If you want to get down, head up to On the Rox, a cool little hangout above the venue.

This can be said of all three clubs on the Saturday circuit, but the Troub is a fixture of the L.A. music scene. Although known historically as more of a singer-songwriter and folk spot that birthed careers of the likes of Elton John, the Troubadour has a continuously evolving M.O. Recently, it’s been known for breaking out U.K. acts Radiohead and Coldplay, as well as showcasing punk and hard(er)core bands. Most shows float around $11 to $20, even with bigger names.

Another “world famous” spot on the Strip, Jack Sparrow’s (aka Johnny Depp) old pad has a history of bringing in some great acts. The venue itself is pretty small, and if you’re lucky, you’ll catch some sweat off of your favorite bassist. Going on a Saturday guarantees a bit of pushing and shoving, but that house party vibe makes the Viper Room what it is. Some shows are free, but most will cost $10 to $15.

The Whisky A Go-Go still reigns supreme as the rock scene paradigm of the West Hollywood Strip. Although it may have fallen victim to surrounding gentrification a bit, the venue still reeks of rock ’n’ roll.

Continuously on the forefront of burgeoning rock-inspired genres, the Whisky can never be counted out and given its incredible history, you can’t deny this venue a visit.

Opened by two aspiring screenwriters as a coffee shop, it’s no surprise Hotel Café has become known as a songwriter’s stage. Since, the venue has evolved into its own brand with a Hotel Café Tour, a record label and a couple Live from Hotel Café albums. Songwriter Sundays (from 10:30 p.m. to close) are probably the best nights to drop in. Be careful though, Café is easy to miss as its alleyway entrance is practically hidden. But as long as you find your way in, you’ll have a good time. It’s indie, acoustic and speakeasy. Try and get there early, grab a bite and a drink and get cozy. Tickets to a show will set you back about $10.

Turns out Canter’s is good for something other than a whitefish on a Kaiser at 3 a.m. Not saying that isn’t enough – it is – but who knew they had live music? Adjacent to the dining space, Kibitz is a cocktail lounge and small-stage haven located within the Fairfax staple, Canter’s Deli. Back when things were simpler, the Doors and Frank Zappa used to jam at the Kibitz. Even the likes of Rick James and the Red Hot Chili Peppers have swung by. Nowadays, Kibitz has got something going on every night from about 10:30 p.m. to a little before 2 a.m. Sunday is a free open mic night.

Still a very regal feeling venue, the Music Box at Henry Fonda Theater puts on some great shows for reasonable fare. Drinks can run you a little bit. But you guys aren’t drinking anyways, right? They’ve even got a dance club thing going on now in case you’re still feeling frisky after the concert. Best thing about this place? They host the Fempire Strikes Back burlesque show ($20). The worst part? Parking. Get there early if you’re driving.