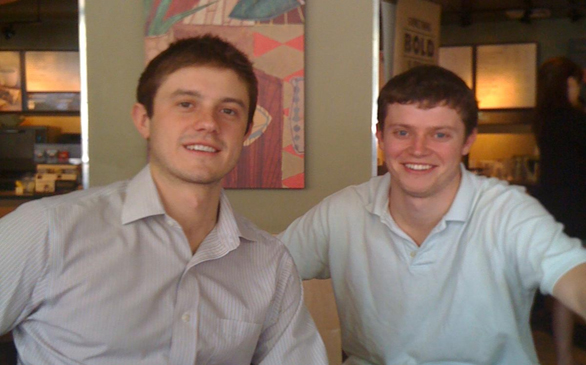 Barely out of college, Wall Streeters Ben McKean and Dan Leahy came up with the idea for VillageVines while working in New York together as investment bankers.

“We used to go out to eat a lot and started talking to a lot of restaurants,” says Ben McKean, co-founder of VillageVines. During these talks they figured out that what restaurants needed was more traffic on slow nights. That was the starting point of VillageVines, which launched in New York in May of this year.

VillageVines is a members-only site that provides discounts to users at high-end restaurants. In exchange for a $10 convenience fee, VillageVines provides its customers with 20-30 percent discounts on their entire bill, drinks included.

Now 24, both founders are young entrepreneurs who have been in the business-making business since they were college roommates at Georgetown. McKean, who was an economics major, says he started a business in college that he later sold. The experience of beginning a company at such a young age instilled in him the sort of entrepreneurial spirit that led to the birth of VillageVines. At the time, working entirely with college students provided him with a more relaxed workplace.

“It never really seemed like work – it was always fun,” says McKean. “There was never really the old boss watching over us.”

This closeness has helped the popularity of VillageVines spread throughout the city.

While VillageVines isn’t the first to offer discounts at restaurants, its focus on more expensive restaurants has increased its popularity amongst business blogs. VillageVines has been featured on CNBC, Business Blog, businessinsider.com and in The New York Times.

“We’re working with restaurants that have never offered discounts before,” says McKean.

Such restaurants in Los Angeles include Fraiche in Culver City and Santa Monica, La Sandia in Santa Monica and Drago in several locations throughout West Los Angeles. The restaurants use the service because it allows them to fill up seats on slower nights. Seats that would normally go empty are filled for a lower price by VillageVines customers.

“We mainly have restaurants reach out to us,” says McKean. “The service we provide them is relatively simple and incredibly profitable.”

Part of that service includes giving the restaurants complete control over their seating, says McKean. Whereas with coupons people come on the nights that are busiest, with VillageVines, restaurants can populate themselves on slower nights, which makes it easier for them to provide discounts.

“The other options don’t work,” says McKean, referring to coupons and other restaurant specials. “They would sell out the entire restaurant for the rest of the week.”

The real winners, however, are the customers, for whom high-end restaurants are finally affordable.