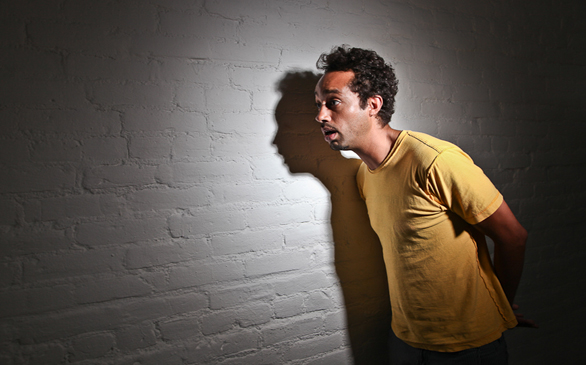 Although his facts are sometimes questionable, his humor often scattered, his field of consciousness mostly hoppy and his two-year-old daughter sleeps with a picture of Bob Dylan under her pillow listening to Pet Sounds, Pigeon John might be the only sane one of us all. But it’s likely that I feel this way only now because he’s got me feeling a bit schizo. And what a relief it is.

For Pigeon John, perhaps there’s a depth perception discrepancy. But it’s like that when we dream anyway, isn’t it?

Walking into the studio, PJ seems to carry some sort of strangeness about him, an eccentricity. There really was no way to tell if it was pure discomfort, or total relaxation. But then it dawned on me that his awkward frenetic behavior may certainly be directly linked to his name: a cause and effect, a self-fulfilling prophecy. Pigeons have some pretty strange behavioral patterns. However, I always just thought that was because of the fact that they eat everything from trash to decomposing food to chemicals. But then I came to realize when we discussed the craziest thing he’d ever done (which involved werewolves, the forest, a live Phoenix show and San Francisco), this theory of mine might all be true.

Pigeon John, how did you get your name?

“It came from Ocean Beach,” he explains.

Of course! Ocean Beach. Go on.

“My friend Prospomantus had a cool rap name. And my name was John [at that time], and Prospomantus says that I should be called Chicken Chest, for some reason, and then Chicken John. Then his mom poked her head out of the kitchen and said, ‘You look more like a pigeon.’ I have no idea why. And it just stuck.”

Longevity is the key here. And PJ has been playing music since 1998. He has put out numerous records (including his latest, Dragon Slayer), was raised in Los Angeles and currently operates in the L.A. underground rap scene. Underground how? Because evidently, all the freaks and geeks are major Pigeon John fans.

Of his demographic, Pigeon John remarks: “I would say it’s an underground rap show that’s real young, and it can get real old. The demographic: usually the guys who don’t get the girls, like me, all types of people. Sometimes they’re pimps, sometimes they’re snow bunnies. Youth pastors, losers, strippers. Everyone comes.”

“I love playing L.A., it’s home turf,” he continues. “They don’t lie to you. They’re local. You see familiar faces, and even the new ones. You get to know the people. And they go, ‘Pigeon John, you’re crazy man.’”

His musical tastes have always come from a wide array of music, beyond hip-hop, beyond anything. It is everything.

“Ever since I was a kid, I’ve been listening to Phil Collins and De La Soul alongside each other. And classical, the Neptunes; just everything, but at the same time, back and forth on shuffle. With music, it’s how well it ages. For a super fan like I am, I love when a band can get old and not annoy the hell out of me. Like for example, Phil Collins, N.W.A., the ‘Miami Vice’ soundtrack. Top Gun too, it just rocks.”

“It’s called Dragon Slayer. I have no idea why,” he says, “If Air did a hip-hop record, with an MC on top, like Broken Bells or something, it might be like Dragon Slayer, but there’s no way or place to put it.”

And as far as shows go, in case you were wondering what to wear, the answer is: all white.

“I like to wear all white. I think it would be cool if people started dressing in all white. If I was working at the door, I’d let you in. For free,” Pigeon John concludes.