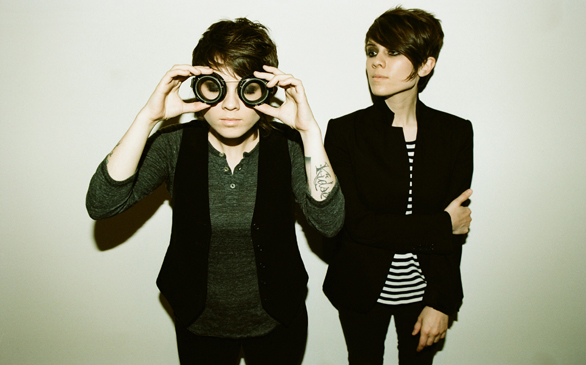 A comprehensive digital bundle from Tegan and Sara is available exclusively at iTunes. The Complete Recollection 1999-2010 includes all six of the band’s studio albums, a complete audio version of Live at the Phoenix 2005, 13 music videos and two documentaries.

Just in time for Halloween, the Saw 3D soundtrack drops on Oct. 26, three days before the movie opens, and features amongst its 16 tracks exclusive previously unreleased songs from Saving Abel, Saliva and Dir En Grey.

Echo Park’s Societys Parasites have their new Hellcat release, 1753, ready to drop on Oct. 26; the punk band squeezed 24 songs about life and death in Los Angeles into as many minutes.

Singer-songwriter/producer/actress/entrepreneur Kandi is concentrating on the singer-songwriter portion of her resume at the moment; the former member of platinum-selling act Xscape has released a single called “Leave U” that’ll have to tide you over a bit until her sophomore album Kandi Koated drops later this year or until you see her live at the Nokia Theatre Nov. 24.

Dead Soviet leaders, TV chefs and scarecrows are all alluded to in the seven songs of the new British Sea Power effort called Zeus EP. Expect a new full-length from BSP in early 2011.

Venice skate-punkers Suicidal Tendencies have re-recorded their classic Possessed to Skate album; No Mercy Fool!/The Suicidal Family includes the new version and a second disc of music from ST spinoff group No Mercy.

In the Valley of Smoke is the new Century Media release from “thinking man’s” metal act Intronaut; catch the band in a hometown appearance Nov. 5 at the Key Club.