Gladiator Rock’n Run: Dan Clark wants you to climb the Stairway to Heaven. 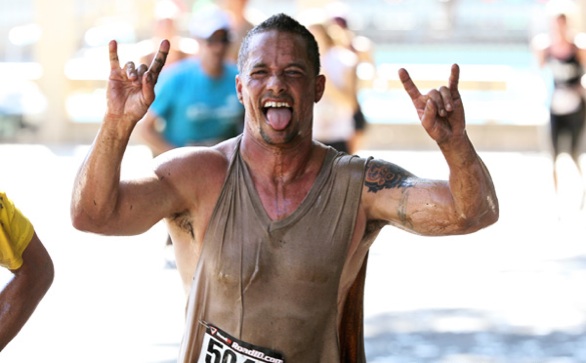 On a foggy October morning, rising before the dawn, I tug on workout clothes and set off into the cold, hushed, inky morning, prepared for some epic exercise. Birds aren’t even awake to chirp yet but, standing at the top of Los Angeles’ Runyon Canyon, I’m greeted by the booming voice of Dan Clark.

“I’m here!” he announces with an explosive burst of energy that shatters the quiet, kicking that morning dew right in the keister.

Clark and I have never met, but as he extends his massive paw to envelope my hand in a warm shake, he already feels like an old friend, probably because I grew up watching him on “American Gladiators.”

Before there was “Wipeout,” MMA or UFC, “American Gladiators” ruled TV. I can’t think of a single kid I knew growing up who didn’t dream of jousting against someone like Clark, better known as Nitro.

Raise your hand if you’ve ever stood on a couch and tried to knock your friend off the ottoman with a broomstick. I know I have. Which is why I jumped at the chance to interview Clark, even if it meant following him up and down the steep, rocky side of a mountain at an hour that usually ends a night rather than starts a day.

As Clark runs me ragged through the dusty canyon, knighting me Athena, explaining the utility of using the Gladiator yell to push through pain during a workout; as he likes to say, “Pain is just fear leaving the body” – and apparently I have a lot of fear – we discuss his latest venture, the Gladiator Rock’n Run, which takes place Dec. 4 at Hidden Valley Park at 8 a.m.

“There’s the guys like me who are in their 40s and 50s who just want to prove they can still kick ass; there are the athletes who are doing it as a real time trial; and there are the folks who just want to have a great time and exercise while they’re doing it,” Clark explains. He says he wanted the course to make you “feel like you’re a kid in the backyard” as you complete challenges like Stairway to Heaven and Buddha’s Burden.

During Stairway to Heaven, where competitors run the bleachers of the Irvine Amphitheater, “You climb so far, it’s like you’re going to heaven,” Clark smiles.

“I like that!” he booms, slapping my shoulder with the friendly force of a thousand buffalo. For Buddha’s Burden, challengers lug bags of rice – 50 pounds for men, 20 pounds for women – 50 yards before dropping them as an offering at Buddha’s feet.

“I wanted the challenges to have some meaning and not be mindless,” he explains.

So how would someone prepare to be Gladiator-ready for the Rock’n Run?

Clark’s own regime involves “slinging the iron,” frequent trips to Runyon (which he’s seemingly the mayor of, making frequent stops to say hello and chat with other regulars on the trail), practicing yoga, cross training, boxing at Freddie Roach’s Wild Card Boxing Club and grappling at Legends.

“It’s all about changing it up,” he explains as we chug uphill.

There are 12 obstacles throughout the 3.15-mile race, with names like Skid Marks (it involves a muddy slip ’n slide), Gladiator BBQ (running through flames) and Rope a Dope (“Grab the rope or fall like a dope”) and awaiting both racers and spectators at the end is a post-race victory party. Now, are you ready for the magic words? There’s free beer!

“Work hard, play hard; that’s what I always say,” Clark says as he tells me that everyone over 21 gets a beer to toast the end of the race while they’re treated to three bands, a costume competition and a turn on the joust pedestal in the Rumble Pit.

“I should probably have, like, three of those, huh? Everyone loves the joust.”

But the Gladiator Rock’n Run is about more than fun and games. The event benefits the Epilepsy Foundation of Greater Los Angeles, an organization Clark’s been involved in since his good friend’s daughter suffered a seizure the day she was born. She’s now 10 years old, has cerebral palsy and “will never be able to walk, crawl or talk.” The Rock’n Run is in her honor because, as Clark says, “She’s the real Gladiator.”