Are You Broke?: Then vote! 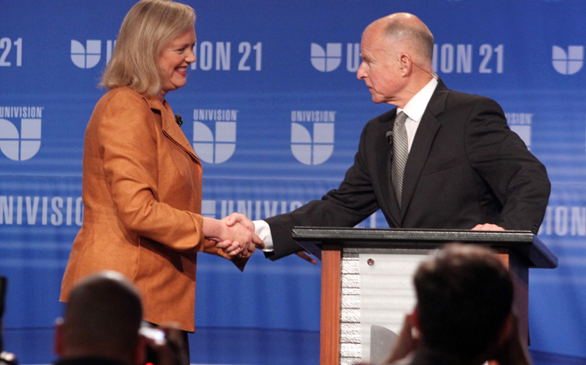 With midterms coming up and the drama unfolding with your friends on Facebook, I’m not sure if you noticed the politicos from Washington to Sacramento going stark mad to get your attention. Yes, the young voters who helped Obama get into office are also the political machines the Democrats and Republicans are hoping to tap into to get control of the House and Senate this fall.

It’s an all-out media war out there, and if you haven’t heard the names Meg Whitman, Harry Brown and a Tea Party having nothing to do with tea or the British, then you need to leave the world of Snooki’s poof and get with the program. Even my YouTube time has been cut short with an annoying political ad of Uncle Sam digging a hole (to presumably plant potatoes for this recession), as an ominous voice gives us the heads up that our national debt is rising, and by the end a little girl in pig tails tells Uncle Sam so sweetly to “Please stop digging.” As much as I’m peeved that there’s now advertising on YouTube, this ad is definitely pulling some strings for any of us who pay our own tuition, during or after school has ended. In the last three years alone, I’ve seen the Los Angeles sales tax raise from 8.25 to 9.75 percent, and UC tuition go up a whopping 32 percent. Though the Nov. 2 midterm election may not have all the glitz and glamour of a will.i.am theme song, this election has the closest impact to us because it specifically relates to the local and state levels.

Politicians have witnessed the power of our demographic in the 2008 election, and they want to utilize it again through viral marketing, Facebook ads and radio spots. I would be very surprised if you haven’t seen one already. Historically, grassroots political revolutions have started on college campuses, including affirmative action, the DREAM Act, rallies against wars such as Vietnam and our most recent endeavors in Iraq and Afghanistan. Last year students and police engaged in standoffs against a 32 percent fee increase that, surprise, was the result of the state’s budget deficit. Especially in California, where the poverty line seems to grow bolder, not voting could possibly mean a council member lavishing in more than $800,000 in annual pay (I sneer at you, city of Bell council members.) while you get paid minimum wage at the campus bookstore.

Still, being involved in politics on campus is eerily similar to the real world, like a tiny microcosm of our own legislative system. You can run for student government where roughly 60 percent of the student body won’t give a damn, but the other 40 percent has a stake in your candidacy because as in the real world, those in student government affect where the money goes too, and this is especially true for our own current midterm elections.

For the candidates running for governor – Meg Whitman and Jerry Brown – each actually has a slightly specific but overall plan to fix education in California, and community colleges and UCs are taking priority in their campaigns. If you’re not at those schools, they are also talking about increasing education grants and a plan to reform K-12 education for your siblings. There are pictures and graphs, too. It’s important to take time to read what they have to say and vote on the candidate you feel will help California the most.

Voting really is the simplest act you can do, but if politics floats your boat, organizations like Lobby Corps actually participate in the process by going to Sacramento to lobby state legislatures on issues facing students, providing you with real-world political organizing experience and the chance to network with politicians (Hello, internships!). And if you’re a real die-hard for your political party, then this is your chance to get students to register for your cause.

From what I’ve seen these past years since the Obama election, national media and political organizations are reaching out to your local campus’ Republican, Democratic or Independent party to vie for the student vote. Nov. 2 is the date, and real change starts by being involved in the process. Sometimes, taking a lower division Poli Sci class isn’t enough. In this recession, especially in the realm of public education, we can’t afford to miss this election.

D-Day
A Meat-Eater and the Vegan Food Tour
3,188 views