The Exorcist and More 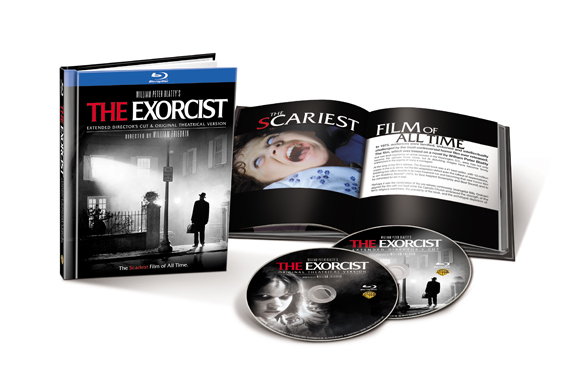 The Horror! The Horror! Two horror classics come to Blu-ray just in time for Halloween. The projectile vomit just got slimier with the hi-def release of The Exorcist. Included are the Extended Director’s Cut and the original version, a new three-part making-of documentary and commentary by director William Friedkin.

Then check out the new and improved Hitchcock classic Psycho: 50th Anniversary Edition. Included are a making-of documentary and In The Master’s Shadow on Hitch’s legacy, plus excerpts from the famous Hitchcock/Truffaut interviews and Saul Bass’ storyboards for the iconographic shower scene.

The Psycho Legacy explores the indelible mark left by Hitchcock’s watershed horror film, which spawned three sequels and a remake. Norman Bates and Tony Perkins, director of the third installment, are interviewed.

The Frog brothers are back! Corey Feldman returns in Lost Boys: The Thirst, the third installment of the action-packed vampire-hunting series.

Shannon Elizabeth and Edward Furlong star in the remake of Night of the Demons.

Stranger Than Fiction: Two amazing Disney nature documentaries come to Blu-ray and DVD, Oceans and The Crimson Wing. Narrated by Pierce Brosnan, Oceans takes you deep under the world’s oceans to swim alongside great whites, migrating whales and other amazing aquatic life. The Crimson Wing takes you to Tanzania, where a million flamingos arrive to hatch chicks and begin the struggle to survive.

While acting in films like An American in Paris and Spartacus, Academy Award nominee Nina Foch also taught at USC, one of the premier film schools in the country. Foch shares the invaluable insight she gained from decades of work under directors like Otto Preminger and Cecil B. DeMille in The Nina Foch Course for Filmmakers and Actors.

Great Expectations takes the viewer through the history of innovative, futuristic and visionary architecture. Also included on the DVD is Kochuu, a look at modern Japanese architecture.

A symphony orchestra brings to life the greatest video game music from Mario to Zelda in Video Games Live: Level 2.

Belgium’s official submission to the Oscars, The Misfortunates is a darkly hilarious coming-of-age story about a teenage boy who grows up surrounded by a family slovenly drunks.

Andie MacDowell and Cary Elwes star in the psychological thriller As Good As Dead. Elwes is an investigative reporter taken prisoner by a group of assailants who hold him responsible for a death in the past. Frank Whaley co-stars.

The Idiotbox: The snarky Joel McHale made the leap from “The Soup” to sitcomland with the hit Community: The Complete First Season. McHale is a disbarred lawyer who goes back to community college and joins a study group full of eccentrics, including Chevy Chase. The hilarious Ken Jeong is Spanish teacher Señor Chang.

Robert Carlyle stars in the “Stargate” spin-off SGU: The Complete First Season. Carlyle leads a crew stranded on a ship programmed to explore the furthest reaches of space.