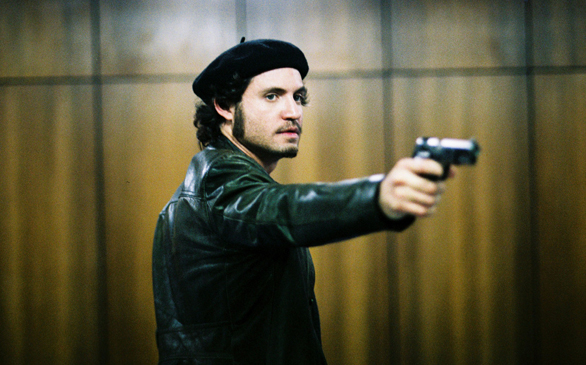 There was a time when global terror wasn’t the domain of pawns and peasants motivated by hysterical ideology and fundamentalist politics. There was a time when terror was the undertaking of a global network of soldiers united by a cause that had its origins in Marxist-Leninist thought. Worldwide revolution was the common goal, and left-wing politics were its guidelines. Terrorist leaders were educated, handsome and sophisticated. Carlos tells this story. It’s a good story to tell, the type of story that makes you want to pick up a gun, memorize some fiery rhetoric and die for a noble cause.

The Carlos in question is Carlos the Jackal, nom de guerre for Ilich Ramírez Sánchez. Born in Caracas, Venezuela, Sanchez was exposed to socialist thought through his parents, primarily his father who was a Leninist lawyer. After pursuing an education that took him around the world, he devoted himself to violent struggle in the name of La Causa. Carlos picks up with the assassination of Mohamed Boudia, a leader for the Popular Front for the Liberation of Palestine (PFLP) by the Mossad, an Israeli secret service agency. The act generates an opportunity for Carlos and precipitates a 20-year odyssey that has Carlos and his crew hijacking, terrorizing, screwing and killing.

Édgar Ramírez gives vigorous life to Carlos and works well with what he’s given. At one point, Ramírez takes on the gold standard of modern feature films and transforms from a golden Adonis into a fat, bloated satisfied mess. The irony of his transformation from a fine-tuned revolutionary into an indulgent sloth isn’t lost on the filmmaker Olivier Assayas who uses Wadie Haddad (Ahmad Kaabour in an excellent performance as leader of the PFLP) to point and gesture at Carlos’ bloated stomach and ridicule, “Look at you, you’re a wreck. You have three months to become a soldier again and not a myth.” The implication being that he has become more like a member of the satisfied capitalist juggernaut that he has sworn to fight than he would like to admit.

The movie demonstrates his complexity well but glosses over his development and his back story. He’s plays the anti-James Bond well, an international man of mystery with a continental flair. He’s fluent in at least five different languages, drinks whiskey with panache and smokes cigarettes like a Japanese businessman at a karaoke bar. He’s cruel but justified by his self-proclaimed integrity. At one point, after killing a Libyan oil minister in a raid on an OPEC conference, he tells a Venezuelan oil minister, “Men of honor have nothing to fear. Only traitors need be afraid.”

Carlos is loyal to his men and hates his women. He’s brutal and demanding, and they find him powerfully irresistible and are enchanted by his position of leadership, his charm and his uncommon good looks. He’s not averse to infidelity and controlling his women with a sadistic tendency toward sex and common violence. He excuses his misogyny with vague references to the cause and the equality of the people, as he yells at his wife Magdalena (Nora von Waldstätten), “I fuck you, I fuck you well … I’m not just your husband, I’m you leader.”

The trouble with any movie based on historical record is that if you know anything about the subject you know how it’s going to end. The difficulty lies in taking familiar information and telling it in an engaging way. It demands style and imagination. Olivier Assayas does an admirable job telling this story, but the movie plods a bit in areas, particularly the second act. Entire scenes and characters could be cut from the movie that wouldn’t affect the telling of the story and would serve to make the movie more lean and crisp.

The energy and the action of the film are its strong points. High-action scenes of gunplay and electric camerawork play nicely against long stretches of dialogue and story setting. In particular, the storming of the OPEC conference and the ensuing blood bath and glimpse into the difficulty of executing even the most precisely planned attack is a top-drawer example of filmmaking.

Carlos would have benefited greatly from a more concise cut. The fat left the film feeling long and inefficient. Overall it’s a small issue. While it did detract from the overall impact of the film, it was hardly the deal breaker that can plague most films. Carlos has the strength and deft touches to entertain and please while it pushes through extended lapses of editing.