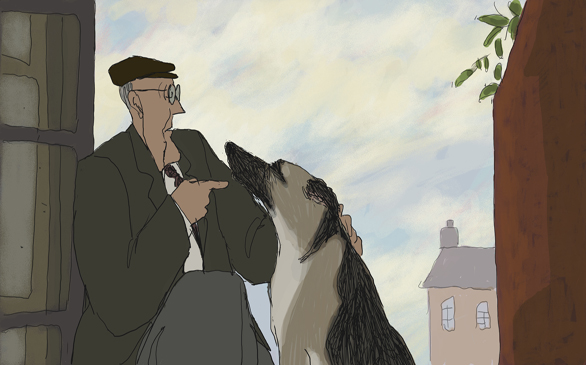 My Dog Tulip is an animated film by Paul and Sandra Fierlinger, based on the memoir of the same name by J. R. Ackerley. It chronicles the 14-year long relationship of the author and his Alsatian (also known as German shepherd) bitch, a story that deals in the trials and tribulations of unconditional love. Though it is an animated affair, My Dog Tulip is aimed squarely at adults but should be enjoyed by anyone that thinks of his or herself as a dog lover.

The animation is first-rate. The directors employed hand-drawn techniques, but not a sheet of paper was used in the execution. Each frame was hand drawn on an electric tablet and finished using a computer program named TVP, or TVPaint. The experience was such a positive one that Paul Fierlinger, an animator for over 50 years, now animates exclusively with TVP. The style is very reminiscent of the cartoons found in the New Yorker, sketchy illustrations brought to life.

As wonderful as the film is to look at, it is also wonderful to listen to. The lead voice work is supplied by a trio of exceptional talent: Christopher Plummer lends his distinctive vocals to the character of J.R. Ackerley, Lynn Redgrave (to whom the film is dedicated) voices Ackerley’s sister and Isabella Rossellini plays the part of a trusted veterinarian. Fans of the late television dramas “Homicide: Life on the Street” and “The Wire” might recognize the voice of actor Peter Gerety, who portrayed recurring characters on both shows, while fans of “30 Rock” may take note of the voice of Brian Murray, who played the father of Alec Baldwin’s character, Jack Donaghy.

The film is obviously a labor of love for the filmmakers, and the script is an imaginative, thoughtful adaptation of the source material. Ackerley’s book is full of bemused insight and introspection. The author, who was openly gay during his lifetime (1896-1967), imbues his words with an honesty and sincerity that is refreshingly non-sentimental. This is life and love observed by someone who has lived a long life as opposed to the self-indulgent nostalgia that poses as Oscar bait this time of year.

If you’ve ever owned a canine, or wish to understand the bond between a pet and its owner, then My Dog Tulip is worth the price of admission.