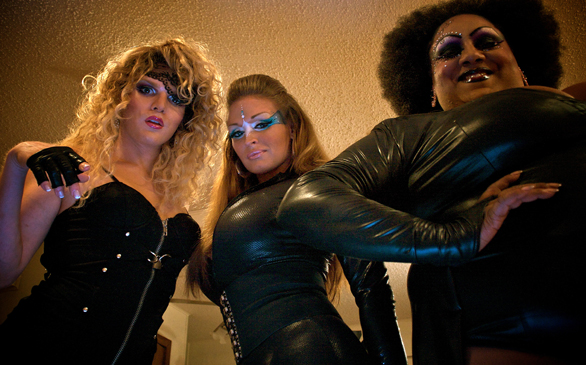 Ticked-Off Trannies With Knives is a low-budget exploitation film. The narrative is slim: People are violated, and then said people seek revenge. Credits roll. The end.

Don’t get me wrong; I like and appreciate trash cinema. I adore Pink Flamingos. I own Thriller: A Cruel Picture. Hell, I’ve even sat through Chai Lai Angels: Dangerous Flowers. Twice.

The production values are passable, and probably self-consciously lowered so as to “pay homage” to the exploitation films of yesteryear, and there is also more than one occasion where director Israel Luna employs a “missing reel” gag. It’s as if Luna understands that there are particular signifiers that identify a film as being of grindhouse quality, but he doesn’t really know how to make a true grindhouse film. When compared to, say, Thriller: A Cruel Picture or I Spit on Your Grave, Ticked-Off Trannies With Knives comes across as a rather tepid affair. What Luna does accomplish is almost as appalling as Divine’s excrement-covered grin at the end of Pink Flamingos: He makes his ticked-off trannies boring.

It’s all a shame, because Luna has assembled a rather stellar cast of ladies. The film’s best scenes are early on, when the girls are all together, riffing on one another and seeming to have a genuinely good time while sharing the screen with one another.