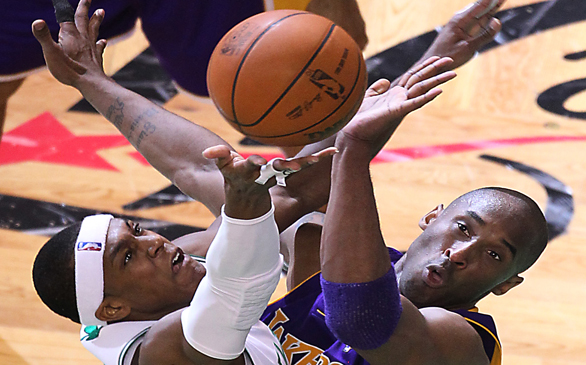 Boston and Los Angeles could face each other yet again in the NBA Finals.
(Credit: Robert Gauthier/Los Angeles Times/MCT)

Basketball season is just around the corner, and the Los Angeles Lakers have assembled yet another championship squad.

Will they reach and win the NBA Finals, however? If healthy, the answer is simply yes. Just like any other sport, the chances of a talented team earning greatness depends on its overall health from starters to the bench, particularly role players.

No matter how much attention LeBron James, Chris Bosh and the Miami Heat attained during the summer, the Los Angeles Lakers remain the unit to beat in the NBA. A prime reason for that is Kobe Bryant, who is the best basketballer in the league.

Additionally, the Lakers carry the best coach of all time in Phil Jackson, best supporting cast for Bryant and one of the best benches. They also acquired some integral athletes during the off-season in Matt Barnes, Steve Blake, Devin Ebanks and Theo Ratliff.

Although the roster is yet to be finalized, you can bet that Jackson will do the best job in getting it done efficiently. Jackson is a true strategic leader who has guided multiple teams to NBA championships. Yes, the Lakers hold a vigorous opportunity in three-peating in June 2011.

Barnes is a small forward who could very well provide a physically intense and defensive presence off the bench. This is why the Lakers signed him, and this is why the team is scarier to face.

Blake, on the other hand, is a speedy point guard who will serve as a backup to Derek Fisher, whom the Lakers re-signed this season. Blake can shoot the lights out of the ball, defend consistently well and flourishes in carrying a counter against foes.

Ratliff is 15-year veteran who gives Los Angeles depth at center or even at power forward sporadically. Ratliff is well built (235 pounds), tall (six feet, 10 inches) and is as tough as big bodies come, so he will assist Pau Gasol and Andrew Bynum in most cases.

Ebanks, a rookie, has played exceptionally well during the preseason. A power forward, Ebanks looks to energize the Lakers bench as Lamar Odom and Shannon Brown have done in the last two years.

Just look at those players named above, and you are already looking at success. Both Barnes and Blake surrendered millions in sacrificed money to come to Los Angeles and win a championship. That means both are hungry to not only win but do so on a repeated basis, as well as gaining postseason births en route to the NBA Finals.

Bryant holds the most competitive spirit in the league. Of late, he has become a true leader and player motivator on the court. He has facilitated the roles of others by simply acting unselfish, charismatic and communicative. It is true that he is coming off a knee injury, but that will not stop him from competing. Nothing ever has, in fact.

Then there is Ron Artest, the starting small forward for the Lakers. Artest is a defensive specialist who portrayed pivotal roles during the playoffs, particularly in the finals. The fact is that the Lakers are stacked with more talent than before; and the current Western Conference truly has no dangerous rivals for the purple and gold.

And when Bynum returns from injury, the Lakers will be more powerful than before.

The San Antonio Spurs have a great team, but they are old and the Lakers will overcome them in no time. The Portland Trailblazers have secured challenges, but their inexperience at being consistent and injury-plagued players will cost them. The Dallas Mavericks, Houston Rockets, Denver Nuggets and Phoenix Suns can all be problematic, but the Lakers have owned them and will again anytime during the playoffs for years to come.

Unbelievably, the Los Angeles Clippers can present a true dilemma. New head coach Vinny Del Negro and the return of Blake Griffin have handed life to the other L.A. team. They have nothing to lose and look to make a statement to the league. They will compete from beginning to end. Certainly, it will be an interesting organization to keep an eye on this season.

Nonetheless, the Western Conference Finals most likely will feature the Los Angeles Lakers against the Oklahoma City Thunder, the second best team in the conference and biggest threat to the Lakers.

From the Eastern Conference, the only teams that may provoke danger are the Boston Celtics, Miami Heat, Orlando Magic, Chicago Bulls and Atlanta Hawks.

The Hawks carry skilled players, as do the Bulls and Magic. It is very tricky to predict who will reach the Eastern Conference Finals, but the Celtics and Heat probably will. This is because the Celtics have been there, so experience is a plus in addition to their summer acquisitions: Shaquille O’Neal and Jermaine O’Neal. They have talent, depth, motivation and a great coach in Doc Rivers.

LeBron James wants it all, which is why he gave up colossal millions with other teams and signed with the Heat as a free agent. He wants to be the man in Miami, and no one can doubt that. However, the city and team belong to Dwyane Wade. Oh, and the Heat also signed Chris Bosh. Yes, the Heat hold the most talented trio in the league, but that does not mean they will win a championship right away, yet alone make an appearance in the Finals. They need time to cope, prepare and gather experience together. Some see them winning a lot and breaking records. Some see them struggling. Some do not believe in them at all. Hey, but that is what happened when the Celtics assembled their big three and won it all.

But I’m calling it: Boston and Los Angeles. Yes, this is the third time both teams will face each other in the NBA Finals in the last four years. For those who recall, I predicted both teams reaching that stage with the Lakers winning. I was correct.

The series will go seven games again, with the Lakers capturing another title.

The Lakers face the Rockets in their Oct. 26 home opener at Staples Center.