The Futureheads/Young the Giant: Oct. 6 @ The Troubadour 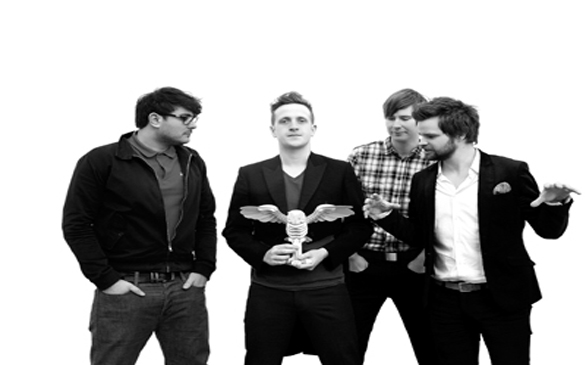 It’s not very often you see five guys on a small stage, like squished tuna, still jumping around smiling and having fun while making beautiful music. Young the Giant takes you to that place with their quirky mannerisms and ethereal sounds that make you feel like you’re traversing a starlit desert. As one drunken fan next to me shouted, and I agreed (totally sober), “They play so well together.”

Lead singer Sameer Gadhia’s voice is melodically sweet and versatile in the way he alternates between two microphones to create two distinct harmonies; basically a moonlight serenade to myself, the crowd and my drunken comrade. Couple Gadhia’s voice with unique instrumentation and you have a definite variety of blithe tones and mesmerizing ballads such as “I Got,” which starts off with a ukulele-sounding guitar and military drumbeat and flows into a soft doo-wop style tune.

Young the Giant has a very rich, bluesy feel that provides the perfect setting to sunset bonfires as well as intriguing a crowd at the Troubadour. It makes sense though, since they hail from Orange County where bonfires are the norm. But what’s great about this band is how versatile they can make a slow melody be, adding some slow strumming here and there and rhythms that blend Latin-style drumming with Bahamian melodies and a stint of jazz; it is a perfect cocktail for a warm night. Young the Giant really has something beautiful to offer, and it was no wonder they were such a joy to watch and listen to.

Everything was very precise with the Futureheads, from the way they played each song with unison to their prim and proper British appearance slowly transformed itself into a type of punk appropriate portrait of sweat and tussled hair. This band, hailing from the UK, is the reincarnation of a neo-punk era, taking pieces from the Ramones’ “Hey Oh! Let’s Go!” with a quick and loud bass drum and sticking straight to raw guitar riffs. Even though punk seems to have a messy feel, there was no way you could tell from their stage presence, you can almost mistake them for being indie in tight pants, buttoned-up shirts and fitted blazers (I swear the drummer sat straight up the whole time.), which translated to their sound, a type of structured punk that could be great fun in songs like “Heartbeat Song” with its catchy chorus and cutesy lyrics. It definitely kept one of the most diverse audiences I’ve seen at a rock venue dancing in epileptic praise. However, this preciseness also made their set a bit monotonous toward the end, since the beat was always kept at the same fast-paced tempo and the guitar never straying from the same chords. It was hard to even notice when a solo was being played. Despite this, the Futureheads pay a proper tribute to the punk genre, taking out any type of fluff and creating songs that can easily become mainstream popular for any British or American muggle.