So & So: Not Just Lucky Musicians With Funny Nicknames 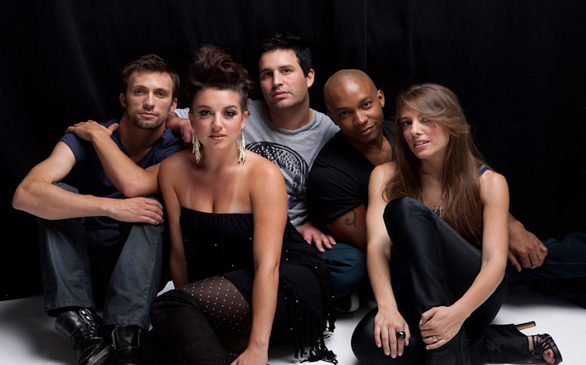 If you’re one of those music hipsters who knows everything that’s new, hot and about to break, then you’re familiar with Miss Muffet (Amie Miriello), Sven (Brandon Rogers), Raisin Higgins (Jay Dmuchowski), Victory at Sea (Adam Hanson) and Bana Banana (Bana Haffar). If not, please meet So & So, the next hot group of talented musicians out of Los Angeles.

No, they’re not a bunch of inexperienced musicians who happened to get lucky and like funny nicknames but a collective group of artists who decided to pull their assets together and create a sound and experience that would take their fans and themselves on a new adventure. Spearheaded by Miriello (lead vocals), So & So came together when she decided to revamp her music career after severing ties with Jive Records.

“I’m getting older and caring less and less what people think of me. Throughout my career there were always label people telling me what they thought was best, and I wasn’t confident enough to disagree. Now I’m indie and I’m an old bitch! This is the real me – now,” says Miriello.

Miriello and Dmuchowski (guitar) met when they were teenagers in Connecticut and have been inseparable ever since.

She explains, “Jay is my best friend, even more like my brother, and he’s beyond talented. I always come back to Jay. We have a chemistry you don’t find in any of these contrived writers’ rooms.”

Then they met Rob “Turtle” Wells – who produced and wrote the original songs with Miriello and Dmuchowski – on Miriello’s solo project. He’s currently not performing with the band but remains part of the So & So family.

He adds, “Amie and I met a couple years ago after her show at the Roxy. My band started opening up for hers at Molly Malone’s. That’s when we started occasionally singing together and we realized that our voices did something special. When she asked me to be in the band, I was already so impressed with her as an artist that I felt like it could be a great fit for me. I’m not really a group person, but this just felt right.”

Hanson (drums) joined the band and then later Haffar (bass). The two of them individually bring a strong rhythmic sensibility to the live performances even though they tend to have a demure presence on stage. Rhythmically, they charge the show with a lot of energy and passion. Hanson is a Berklee College of Music alumni and Haffar has studied music abroad as well as performed extensively.

In this strange town we call Los Angeles, thousands of hopefuls show up desperately trying to make it in Hollywood. It’s a place where best friends who move into town together quickly become enemies when opportunity knocks. Not true with So & So; they seem to not only be friends but also fans of one another.

Dmuchowski explains, “Amie is the ultimate sex symbol without even trying. Then Brandon, well, you don’t become an ‘American Idol’ finalist if you’re not a born star. Adam is a former Abercrombie model, and the most kick-ass drummer I know. Then there’s Bana, who is an early 20s knockout, and she is one of the most well known bassists in L.A.”

Enough said, any more and we’d be questioning if they were paying each other to gloat.

The most important factor of course is the music.

“The younger fans will love it because the subject matter we tackle is all the stuff you go through in college. Finding your place, falling in love, getting too high at a party, etc. The older fans will dig us because on a musical level, the songwriting is strong, the concepts are well realized and the musicality is there,” Rogers explains.

So & So have an understanding about themselves that’s confident but not pretentious. They just seem to know where they’re going without trying too hard. You get the real gist of who they are as a band when you see them live. Strong vocals, soulful melodies, serious undertones and thoughtful lyrics drive their shows and make the audience want to join in and come back for more.

Categorized as indie rock/pop/folk/soul, Dmuchowski concludes, “The music is good to listen to. I know it sounds overly simplistic, but it’s true. In entertainment, you can’t fall into the trap of pleasing yourself all the time. We want to make music that we love or else we wouldn’t have fun playing it, that’s obvious. But it’s for people, a lot of people.”

So & So are scheduled to play Hotel Café in November. For more information, visit myspace.com/whoissoandso.