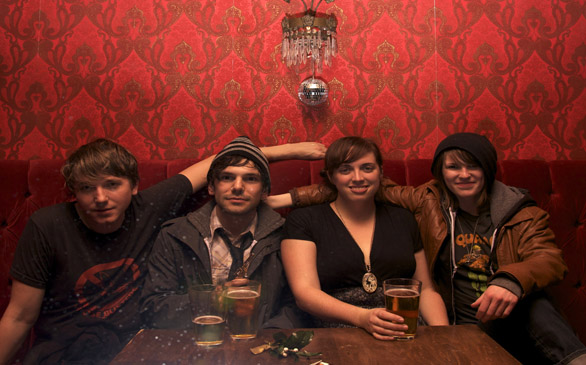 How Come I’m Dead? is the just-released new album from Hot Panda, and the band is inviting fans to breathe some life into the effort’s first single, “Mindlessnesslessness.” Grab the stems for the song at mintrecs.com, work your remix magic on them and then send your completed remix to info@mintrecs.com.

The winner gets a Hot Panda prize package that includes a T-shirt, vinyl, the band’s signature hot sauce and the placement of their remix on an upcoming Mint Records compilation. Runners-up will have their remixes posted on the Mint Records and Hot Panda Web sites. Deadline for entry is Nov. 12.

It’s not often that a drummer gets so much credit for pulling a group together, but that’s exactly what has happened with Los Angeles-based girl group Warpaint. The quartet formed around three longtime friends in vocalist/guitarists Emily Kokal and Theresa Wayman and bassist Jenny Lee Lindberg but finding a beat-keeper was another story. Warpaint started off using a drum machine and then burned through five drummers, ultimately welcoming Stella Mozgawa into the fold after she dazzled during recording sessions for the first full-length Warpaint release, The Fool.

“Our first month together was inspiring and exciting, but it also felt like we were walking on a tightrope,” says Wayman.

“But it was really impressive watching Stella personalize her parts so quickly,” adds Kokal. “She never got intimidated or overwhelmed either. She was a champ and like any great drummer, our backbone in every sense.”

The Fool drops Oct. 25 on Rough Trade Records. Warpaint is currently touring Europe, but expect hometown shows to be announced in late November.

The “Go Green” movement takes on a whole ’nother meaning this Election Day as VP Records in conjunction with Greensleeves Records releases the third volume in a series that celebrates the virtues of marijuana. The 18 tracks on Hi Grade Ganja Anthems 3 feature an international cast of contributors from the rock and reggae worlds, including Jamaica’s Busy Signal who checks in with “Spliff Tail,” Bermuda’s Collie Buddz performing his hit “Come Around” and Dutch act Ziggi with “Ganja Smoke in the Air.”

Junior Reid, Sizzla, Queen Ifrica, Gyptian, Guinney Pepper and Richie Spice are among other contributors as are Slightly Stoopid, Inner Circle and Capleton, who team up for a remix of “No Cocaine.” California voters will be determining the legal status of marijuana use in the state via Proposition 19 on Nov. 2.

Mike V will also be performing with his new band Banished. The Glory Bound Festival takes place at the Hollywood Palladium Nov. 13.

Monster rockers Gwar will be streaming their Halloween show live from the Rave/Eagle’s Club in Milwaukee; it’s a pay-per-view event that costs $3.99 if you sign up in advance at gwarlive.com or a buck more on Oct. 31. The band’s Bloody Pit of Horror drops on Metal Blade Records Nov. 9.

You’ll be hearing music from L.A.-based band Some Hear Explosions in the upcoming films The Lake Effect and Pound of Flesh; see them perform music from their recently-released It’s Our Time Now when they play the Roxy Oct. 30.

Think your band is worthy of getting airplay on Jonesy’s Jukebox, now relocated to KROQ? Then send your CD and bio to the show’s host, former Sex Pistol Steve Jones at P.O. Box 790, Hollywood, CA, 90027.

Electro-popper Gary Numan is celebrating the 30th anniversary of his The Pleasure Principle album with a short tour that includes a two-night stand at the El Rey Nov. 3 and 4. Numan will perform the entire album (including the hit single “Cars”) each night along with music from his forthcoming release, Splinter.