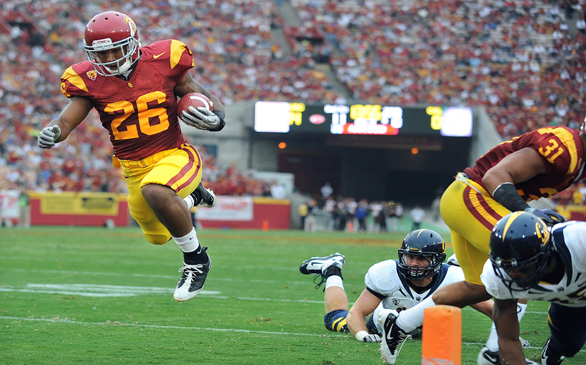 After two straight losses that came in the final seconds, the USC Trojans fired back at their critics with a blowout win, 48-14, over the California Bears at the Los Angeles Coliseum Oct. 16.

“For the first time, it really felt like we played exactly the style that we want to play in,” USC head coach Lane Kiffin says.

USC rolled on special teams, offense and defense after taking blasts from the media and fans nationally.

Sophomore quarterback Matt Barkley led offensively, passing for 352 yards on 25-of-37 attempts and tying a school record of five touchdown throws. He had no interceptions, and his passer rating almost hit 200.

“We couldn’t slow them down on offense,” Cal head coach Jeff Tedford mentions. “They went up and down the field. In both phases of the game, they dominated us.”

Meanwhile, Southern California native freshman receiver Robert Woods continues to make noise for the team after making seven receptions for 116 yards and two touchdowns, including a 16-yard catch to open the scoring at 11:10 in the first quarter.

Senior receiver Ronald Johnson, who has been tightly defended of late, collected seven catches for 45 yards and two touchdowns. Johnson has facilitated the play of the emerging Woods due to his ability to create massive trouble for the opponent’s defense.

By halftime, the Trojans led with a commanding score of 42-0. They even held a 45-0 edge after Joe Houston’s 27-yard field goal at 5:04 in the third quarter. USC’s defense was spectacular, allowing only two TD scores and the first one arrived with 2:59 in the third.

“It was just a different mind-set,” cornerback Shareece Wright says. “Playing every play like it’s your last. Doing everything right.”

The Trojans nearly bounced back into the Top-25, but they will face their toughest challenge yet thus far this season after having a bye week. USC entertains No. 1-ranked (AP) Oregon on Saturday, Oct. 30, at 5 p.m.

“I’m glad we have two weeks to get ready for that,” Barkley remarks “It will be pretty neat if they come in here as the top-rated team in the nation. I know we’ll be fired up for that.”

USC’s defense looks to continue and build on its success against Cal with Oregon.

“We will be ready,” sophomore middle linebacker Devon Kennard says of the upcoming affair against the Ducks. “They have an explosive offense and there’s history from last year with what happened.”