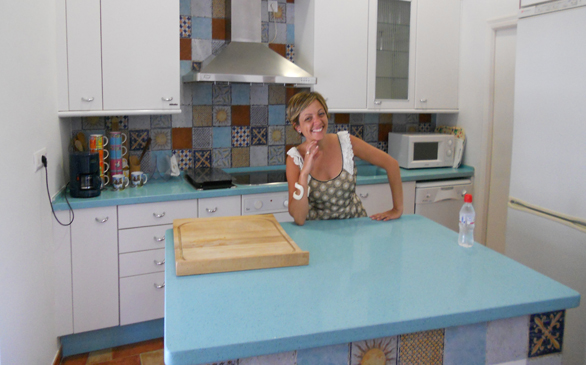 Angeles Castro Sánchez is the director of K2 Internacional where they offer culinary classes.

Whenever I flirt with the notion of learning another language, I am reminded of the words of an old college professor: “If you really want to learn a new language, you must fall in love with the culture.” In other words, if one hopes to grasp the heart and soul of a foreign tongue, the good student must pursue it with lustful abandon. The question of which language to pursue and where to study is one of the most exciting decisions the young foreign exchange student will ever make.

These days, the most popular choices for American college students are Italy, Spain and France. Of all of these countries, Spain has seen the greatest increase in student enrollment in recent years. The reasons are many. With over 400 million native speakers, Spanish is the world’s fifth largest language group, making its proficiency an asset on any student’s resume. Others are drawn by Spain’s wealth of history and culture. In response, the Spanish government has stepped up efforts to promote its language schools and ensure top-quality experiences. The government-sponsored Cervantes Institute gives its seal of approval to schools that meet a high academic standard. To join the coalition of accredited language institutes, called Fedele, schools must be assessed every three years and satisfy a host of requirements, such as up-to-date teaching materials and small class sizes.

Currently, over 30 percent of all foreign language students in Spain choose to study in one of the four major cities in the southern province of Andalucia: Seville, Cadiz, Malaga and Granada. Andalucia is renowned for its colorful cultural heritage and ancient history. Over the long arc of history, the region has been occupied by nearly every great civilization, including the Phoenicians, Greeks, Carthaginians, Romans, Moors and Visigoths. The province is also home to a large gypsy population with roots in India, and which first migrated en masse from Egypt, hence the term “gypsy.” It is this population that has given the world Flamenco, the passionate and seductive art form that has become an important part of the Andalucian cultural identity.

The capital city of Andalucia is Seville, with a population of nearly two million people. Its historic center, a complicated network of cobble stone roads just off the banks of the Guadalquivir River, gives the city a small-town feel. Seville is rich with historical monuments, the most famous of which is the Alcazar, a Moorish palace with stunning gardens the size of several football fields. Most of the language schools are located in the historic center, such as the prestigious Center for Cross-cultural Study (cccs.com). Inna, a foreign exchange student from Harvard University, chose this school for the internship opportunities it provides. Through the program, she found an internship with a local daily newspaper. Inna has the focus and determination befitting an Ivy Leaguer and yet what she most appreciates about the city is the leisurely lifestyle. The school itself is housed in a beautiful old building with ornate tile interiors that give the confines an air of distinction.

Another popular language school situated in the historic center is Clic IH (clic.es). At Clic the hallways and main lounge bustle with students from such far-flung places as Japan, Denmark and Dubai. Clic boasts state-of-the-art classroom facilities, including touch screen display monitors.

Downstream from Seville at the mouth of the Guadalquivir is the city of Cadiz. Founded by the Phoenicians in ancient times and reoccupied by every imaginable empire over the course of Spanish history, this little city has retained its small size by virtue of its geography. It is a peninsula that juts out from the mainland like an outstretched frog’s tongue. Surrounded by beaches, the city has the laid-back feel of an island culture. The people are known for their warmth and generosity. It is a point of pride among the population that theirs is the only major Spanish city without a bullfighting ring.

Angeles Castro Sánchez is the director of K2 Internacional (k2internacional.com), a language school located in the heart of Cadiz just upstairs from a central plaza. Together with her sister, the two run the small school with an abundance of love. Every detail of the school’s interior displays the care they have taken to make it warm and inviting. The school is equipped with a kitchen where they offer classes in the culinary arts of Andalucia. The special pride that Angeles and her sister take in creating a family environment is reflected in their many adoring students.

The other major Andalucian beach city is Malaga, famous as the birthplace of artist Pablo Picasso. The city has a decidedly more urban feel than Cadiz, but still retains a carefree Mediterranean atmosphere. The impressive architectural landmarks of Malaga reflect the city’s long history. These include the Moorish-constructed Alcazaba, a recently unearthed Roman amphitheatre and a massive Renaissance-style cathedral with baroque facade. Malaga is renowned for its festive nightlife, which doesn’t get popping until about 11 p.m. and continues into the wee hours of the morning.

Two schools of distinction are the upscale Malaca Instituto (malacainstituto.com) and the comparatively down-to-earth Alhambra Institute (alhambra-instituto.org). The Malaca Instituto, which takes its name from the ancient Roman name for the city, is perched on one of the many hillsides that overlook the Malaga Bay. The school’s high-class facilities include on-campus housing (private suites are available), a pool, a plush study lounge and a dance studio. One gets the sense that the student body is very well cared for.

The Alhambra Institute is located in one of the city’s suburbs. One student describes her time at the Alhambra Institute as “a truly authentic Andalucian experience.” An attorney by trade, she found herself with a six-month break between firms and chose the school on a whim after seeing the Web site. While enrolled at the Institute, she started taking flamenco classes in the on-site dance studio as a way to relax from her Spanish studies. The dance instructor took a liking to her, and before she knew it, she was performing regularly with the teacher’s flamenco group at local venues. The school’s director explains how the school promotes itself: “We sell the illusion and make it a reality.”

The city of Granada is perhaps the most visually stunning of all the cities in Andalucia. Built along the base of the Sierra Nevada Mountains, one can gaze at snow-covered mountains year round from any part of the city. The air is fresh and crisp and contrasts sharply with the dank tropical climate of the Andalucian coastline. It is here that the artistic genius of the Moorish Empire reached its grandest heights in the construction of the Alhambra. Both a fortress and a palace, the Alhambra is recognized as one of the world’s most magnificent architectural treasures. Presiding atop a steep hill, the palace commands a view of the entire region.

Granada has a student population of over 200,000, consisting of Spanish natives and foreign exchange students. Language schools like Escuela Montalbán (escuela-montalban.com) and don Quijote (donquijote.org) cater to students’ desires to be part of a tight-knit learning community. The schools organize class trips around the region and invest in making the facilities attractive and comfortable.

The historic center of Granada was built in the valley below the Alhambra and delicately climbs the hill opposite the fortress. Here, the language school Escuela Castila (castila.es) is tucked behind high walls. From the school’s upstairs classroom one can feast their eyes on a magnificent view of the Alhambra. At dusk the fortress walls reflect the light of the setting sun and turn brilliant, reddish orange. An American family from Seattle – complete with father, mother and teenage daughter and son – were so enchanted by the place they decided to cease their travels and take up residence at the school. The family’s story speaks to the powerful effect Andalucia has on people and causes one to wonder what it is that has attracted generations to this region.

The masses of tourists and students are only the latest arrivals to a land that has been coveted by so many passing civilizations. Its natural beauty is undeniable and yet there is something more, something intangible, merely hinted at in the heartwrenching song of the Flamenco, a song of loneliness and death, but also joy and passion, that inspires a certain devotion (if not heartbreak) in the shipwrecked listener. The Spanish have a word for this, “duende,” describing a moment of heightened reality, the profound experience of encountering life’s hidden nature. Duende is normally associated with the cathartic power of music, dance and poetry. Yet this mysterious element is woven into the fabric of Andalucian life. Indeed, it is part of the region’s enduring allure. So if you plan on studying Spanish abroad and are willing to risk falling in love with the culture, Andalucia awaits.